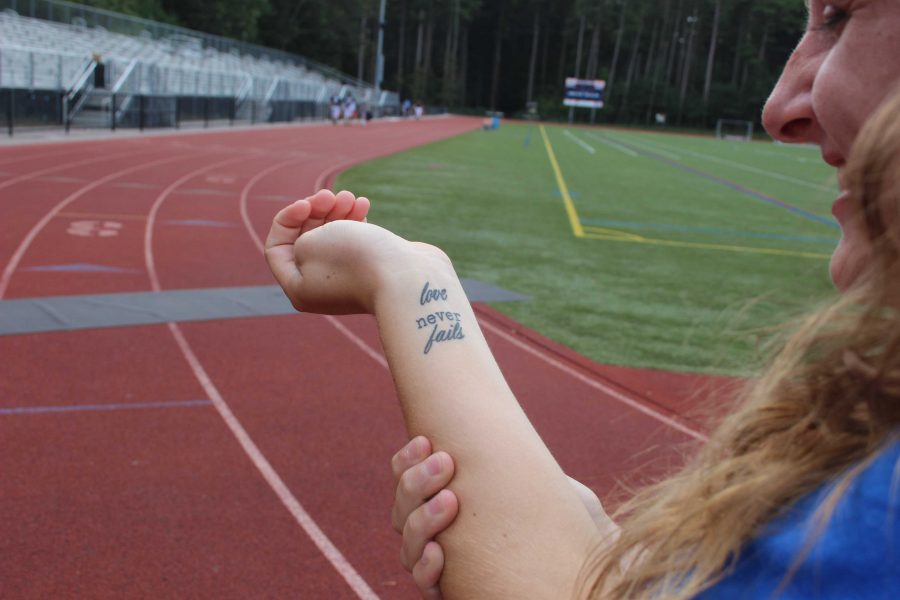 One year ago at the 2014 Frank Kelley Cross Country Invitational – a 5k race at the Wrentham Development Center – everything was going well for then junior Kyra Arsenault until “in the last mile [she] felt a pop.”  She still finished the varsity race and placed 25th to medal with a time of 21:35. A couple days later though, when the pain in her foot refused to go away, a doctor showed her the x-ray that revealed the stress fracture in her foot – a fracture that sidelined Arsenault for the rest of her Cross Country season and the majority of her winter and spring track season.

A 2015 captain for Walpole Girls Cross Country, Kyra returned to her pre-injury form over this summer.  She has finished not only as the second Walpole finisher in both league meets so far, but she also redeemed herself at the 2015 Frank Kelley Invite on Saturday, September 26 by running a time of 20:48 – almost a minute faster than last year.

“Kyra has been a key member of the varsity team and the team’s overall success thus far in the season is largely based on her recovery and perseverance through her injury,” said Girls Cross Country Coach Jamie O’Leary. “Her drive and determination is a lesson all the girl’s on the team can strive to learn from.”

As captain, Arsenault uses both her injury experience and her sincere enthusiasm to lead her teammates.  Arsenault even permanently tattooed one of her favorite lessons from the recovery process on her wrist: “Love never fails.”

Unlike many athletes who get sidelined for 4-6 weeks, her recovery took nine long months.

As the 2014 Cross Country season came to a close, and with winter track rapidly approaching, Kyra was cleared to run by her doctor. Despite the orders to ease back into running, Kyra felt the pressure of the three month training gap between her and her teammates. With the fear of falling even farther behind, Kyra ignored her doctor’s wishes.

“I tried to come back too fast and re-stress-fractured it,” she said.

Unable to do much of any physical activity after the re-fracture, Kyra refused to let that stop her from attending every meet and every practice.

“I realized I had other ways to contribute,” Kyra said, and contribute she did – by scoring meets, assisting the coaches, biking in the weight room, and cheering on her teammates.

“It was also really special to be able to sit on the sidelines and watch the girls I love do great things,” said Kyra. “It brought me a whole new perspective.”

However, while everyone publicly saw the usual happy-go-lucky Kyra,  the one who remained optimistic about recovery, the one who made sure she yelled and cheered for every race, she struggled more privately with her injury.

“It was the worst feeling watching everyone being able to do what you are passionate about and love so much,” she said. “I remember wanting to give up, to just hop on a train and go somewhere so I wouldn’t have to deal with my problems.”

During spring track, her doctor gave Arsenault the go-ahead to run. This time around though, Kyra eased slowly back into running, in order to avoid re-injuring her foot yet again.

“Her recovery was hard and slow,” Girls Track Coach Conor Cashman said. “We took spring very slow by having her run two laps at a time every other day for weeks. Slowly and steadily, she came back.”

With her enthusiastic personality, Arsenault begged Coach Cashman for her return to be in the Two Mile, a long and hard 8 laps around a track.  After weeks of her slow return, Coach Cashman conceded and added Kyra to Two Mile lineup for Walpole’s last meet of the season, a meet they won 87-48 against Dedham. Because Dedham had no athletes in the Two Mile, the meet was the perfect opportunity for Kyra’s first and last race of her junior track season.

Kyra finished the race with a time of 13:50, almost a minute slower off her previous 12:55 personal best.

“[The race was] a huge personal accomplishment for her after not competing for nine months,” said Cashman.

“I started crying when I finished,” Kyra said. “As I ran, every one of my teammates were cheering me on, the same way they were when I couldn’t run and all of the parents and coaches and I knew that it wouldn’t have happened without them.”

Looking back on her year long injury and triumphant recovery, Kyra chooses not remember the injury as a frustrating or dismal time; instead, she thinks of the whole thing as a learning experience.

“It was really all a blessing in disguise,” Kyra explained. “I’ve learned a lot from losing running. It’s what taught me that I set my own limits,” and that sometimes “life is good even when it doesn’t seem like it.”