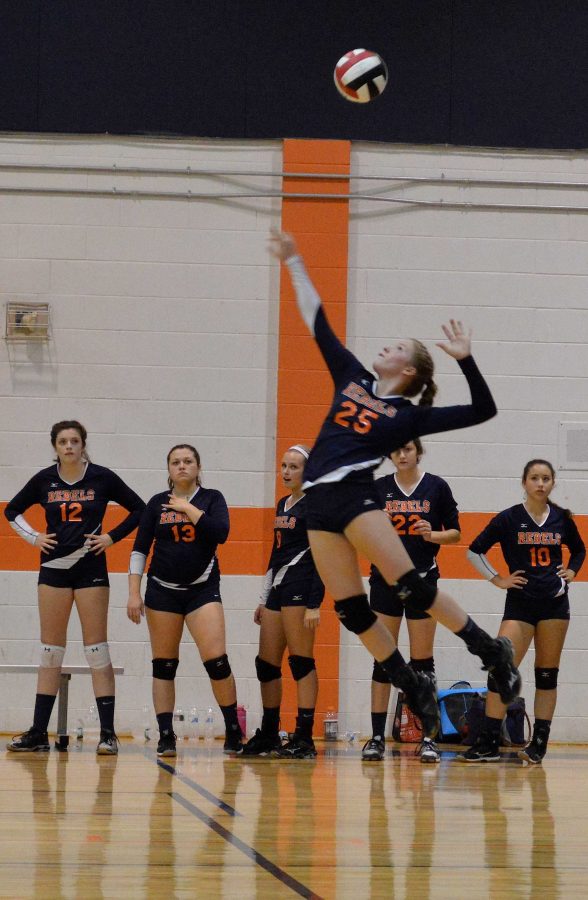 Under Coach Lisa Cyr’s coaching tenure, only three girls had ever made varsity as a freshman: Shannon Cullen, Stephanie Barmakian, and Summer King.  This year though, freshman Abby Rae has earned a spot with those three by stepping up for the Rebels at the outside hitter position.

“Abby is a talented athlete who is driven and focused. She is a versatile player so no matter where I put her, she adjusts and plays that position well. She can do it all,” said Cyr.

Rebel Volleyball took on Framingham on October 15 and won in 3 sets. At the end of the third set the Rebels were down 23-24, but freshman Abby Rae won the game by completing 3 aces in a row to win the final set at 26-24. For her service, Rae received the player of the match award for this game. In addition, Rae won the player of the match award on September 9 against Natick and September 29 against Needham.

Although the Rebels had a difficult start to the season, they are increasingly getting better and have won their last 3 out of 6 games. After graduating 8 seniors it was very important that underclassmen became comfortable on the team and could contribute as starters.

¨Everyone is so nice and welcoming. They make me feel like I am a part of the team, and not an outsider,¨ Rae said.  “Learning from my coaches and teammates is helping me to become a better player.”

Although she also plays gymnastics and softball, Rae said “[volleyball] is definitely my favorite sport.”

With the Rebels will graduating three seniors (Kirstin Barber, Katie McGovern and Erin Reilly), the team next year will have to match their stats including Barber’s who is first on the team for kills and first for kill percentage. This will call for Rae and other underclassmen to step up into these roles.

¨Abby will continue to get better with every year ahead of her. She earned her spot on the team and on the court. I do not see her ever giving that up,” Cyr said.