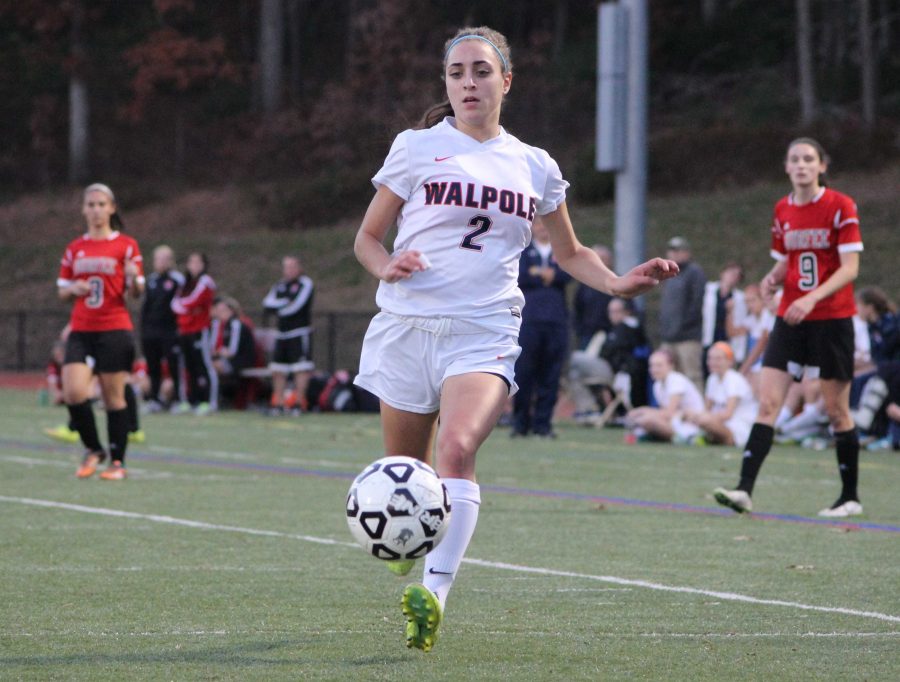 By. David Moser, Pictures by Ellie Kalemkeridis and Julia Adams

According to senior midfielder Alyssa Rosen, Walpole needed to focus on one thing going into the playoffs: “[They] needed goals.”  On Wednesday, November 4, Walpole accomplished their goal by masterfully outplaying Durfee in the first round of the playoffs and bringing home a huge victory (8-1). Two days later though, their season ended on November 6 with a loss against Franklin (3-0).

After their .556 season, Walpole just made the postseason tournament by a two point margin by earning twenty points out of eighteen that were needed. The team’s 7-5-6 record awarded them the 14 seed, while they played 19 seed Durfee on Wednesday.

After the Durfee game, no one could have known scoring was an issue, for the team notched four goals in the first half alone. Junior Tayla Randall scored an opening minute goal before most fans were even in their seats. Randall’s goal quickly set the tone for the rest of the game, for after that, only ten minutes later, junior Tess Erwin notched Walpole’s second goal with a strike off the post and in. Similar to Erwin’s goal, senior Julia Sandquist scored for the Rebels, again off the post. Additionally, Sandquist scored Walpole’s fourth goal with eight minutes left in the half. Despite the fact that Durfee’s goalie had a strong goal kick, she could not move quickly enough to stop the shots coming at her.

Not only had Walpole’s offense drastically improved, but so had their defense. In the first half, Durfee only had two major scoring opportunities that were both easily shut down by veteran Walpole goalkeeper, senior captain Kaitlin Brown. “They really only had one good player up top, but the defense shut her down pretty well,” said Brown.

Going into the second half, fans believed that Walpole simply had a good start and expected Durfee to step it up, since both teams had similar records during their regular season.

However, that proved not to be the case, for the Rebels continued to pile on the tallies. Durfee even switched goalies at the beginning of the second half, but even she could not stop Walpole’s  dominant offesnse. Senior Alyssa Rosen quickly sent in a shot from the 18 yard line that hit the bottom-left back of the net. Walpole followed up with another goal off a corner thanks to junior Tayla Randall, which put the Rebels ahead 6-0.

Up to this point in the game, the play was largely in Durfee’s half of the field. Until a tiny lapse in defensive judgement, and the Hilltoppers got their first and only goal of the game. At this point, there was 30 minutes left, so Walpole did not have any doubt about their hold on the game’s lead.

“We were up by five. Yeah, letting one up [is disappointing], but we were still dominating,” junior Tayla Randall said. “We would not let them get another one.”

The Rebels quickly ended Durfee’s momentum and any hope they had of making a comeback, for sophomore Hannah Perkins’ bullet shot from outside the 25 yard line put Walpole up 7-1. After that, junior Tess Erwin scored her second one of the game and put Walpole up 8-1 with ten minutes left.

Walpole’s problems scoring seemed to have dissipated, for Walpole had three players score two goals each: senior Julia Sandquist and juniors Tayla Randall and Tess Erwin. Walpole’s victory pits them against the 3 seed Franklin away on Friday, November 6. “The way we played and the amount of goals we scored definitely gave us the momentum as well as confidence we needed,” said junior Meghan Foley.

On Friday, Walpole played the 3 seed Franklin, and lost 3-0, ending their two game tournament run. “Despite our loss, we played through to the end,” senior captain Romi Kondo said, “We surpassed our expectations for the season.”