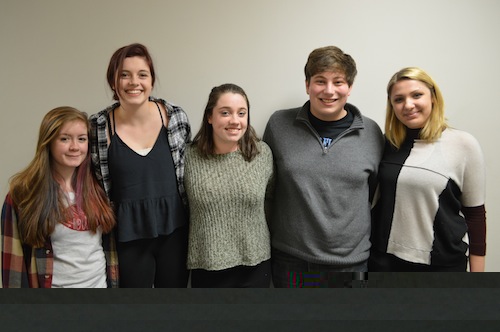 Last year, the Walpole High School film department kicked off a new annual event called the Turkey Shoot, which originated as a fall fundraiser for the film festival. The Turkey Shoot is open to everyone, including non-film students and WHS alumni. To compete in the event, crews must get together on the day after Thanksgiving and wait for Michael Alan—the film teacher and festival director—to tweet out the required character, line, and prop, which then starts the 24-hour window they have to finish their three minute movie. Alan believes that the Turkey Shoot does not only benefit the film fest financially, but it also allows people the opportunity to experiment with film making.

“[The Turkey Shoot] is a great way for crews to get their feet wet making a short film. It also gives the alumni an opportunity to make another film,” said Alan.

This year, the Turkey Shoot filming process took place on Nov. 26, and the showing of all nine submitted movies was held on Dec. 22. The required components of the each film included the character Cameron Day, an animal control officer, the line “You’re right, but you forgot one thing,” and a hula hoop as a prop.

Every crew integrated these requirements into their film in a unique way. Some movies such as “Where in the World is Cameron Day?” even featured last year’s required Turkey Shoot character, Robin Russell. In addition, the movie “Day and Night” went the route of creating a character called Cameron Night, who opposes Cameron Day.

At the end of the showing, the audience voted online for the winner. The winning movie, “The Turtle Shoot,” included film students Felicia Romeo, Katie McGovern, Matt Moriarty, Max Simons, Bridget Connell, and Meredith LoRusso. Their film combined a voice-over narration with short clips to create a film that made the audience laugh.

“I liked [the Turkey Shoot] mostly because of the people I was with,” said Meredith LoRusso. “It is really fun when you are with creative people who know how to make [a class requirement] entertaining.”

Although this year’s Turkey Shoot has come and gone, Alan advocates for people to take part in the Turkey Shoot in the years to come.

“I encourage students who want to be a part of the film festival or just make a fun film with their friends to participate,” said Alan.