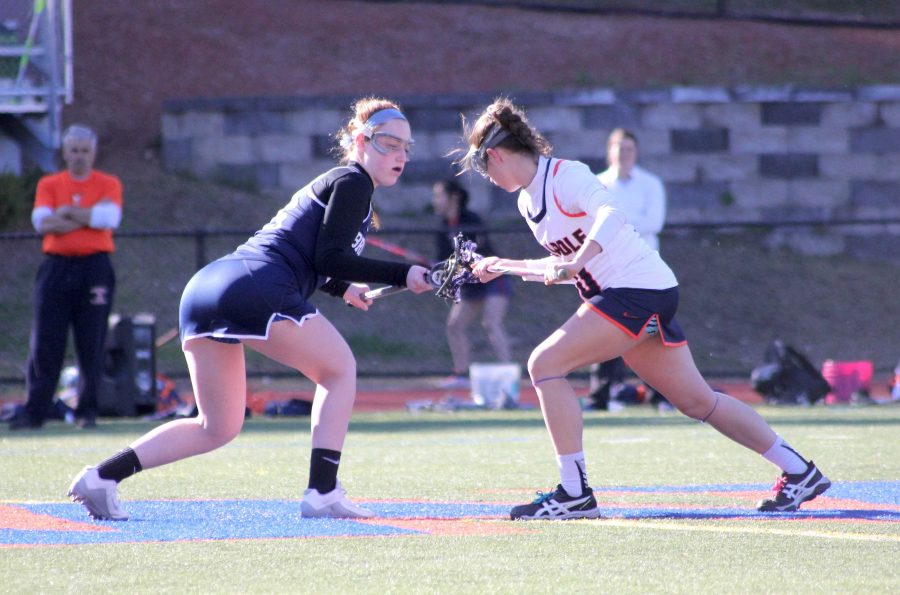 In the Rebels home-opener and second game of the season, Walpole’s Girls Lacrosse team faced off against the Wellesley Raiders. Fresh off a decisive win over Newton North on April 8, 16-11, Walpole carried over a lot of momentum into their first homestand. The team fought hard and eventually edged out Wellesley in overtime to take a win, 17-16.

For the better part of the first half, Wellesley was in control of the faceoffs. Walpole lost the draw to start the game, and then continued to struggle with them for the rest of the half.

Towards the end of the first twenty-five minutes, the Raiders held a three goal lead over Walpole, 8-5. Despite the score, the game was neck ‘n’ neck- a solid matchup between two Bay State League rivals. Walpole’s struggles did not linger much longer; however, for the team notched two quick tallies in a row to bring the score to 8-7. In the last five minutes of the half, the Raiders scored another goal, but the Lady Rebels followed up with two more of their own. The score was now tied, 9-9, heading into the second half.

“Tension was high, but we knew the game was ours” said senior captain Hannah Nadeau. “We had all the momentum.”

The game was still neck ‘n’ neck for the majority of the second half, but Walpole remained down on the scoreboard, again, 16-15, with two minutes left to go. In an attempt to stall time until the final whistle, the Wellesley goaltender tried to keep the ball to herself. Walpole’s ability to keep a strong defense on the Raider players helped to prevent a pass, and so the goalie was left alone. Sophomore Celia Walsh charged the goalie, who retreated behind the net. The goalie hung her stick enabling Walsh to get a good check and steal the ball. Walsh then passed the ball to sophomore Mia Drummey who stood alone in front of the empty net to tie the game 16 apiece.

The draw to start overtime was crucial because first team to score wins, yet Walpole lost it again. It did not matter, though, for Walpole quickly regained possession. Walpole managed to get to every ground ball throughout overtime, thus preventing the Raiders from setting up an offense. Eventually, sophomore Emily Curtis rolled the crease to score the game winning goal. Girls Lacrosse took home a win in possibly one of their most exciting and intense home openers, 17-16, over Wellesley.