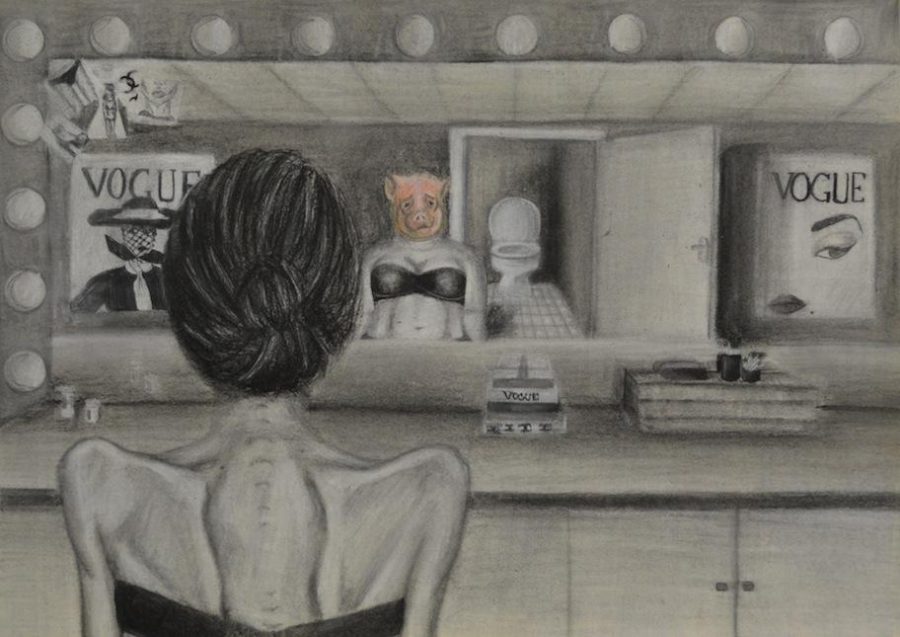 Sophomore Hannah Perkins' art piece titled "Pressure." Eating disorders cause individuals to have a warped view of themselves and their worth.

According to the National Eating Disorder Association, anorexia causes an individual to have symptoms that include inadequate food intake and an intense fear of weight gain — all usually due to a low self-esteem related to body image.

Senior Samantha Chauvin competed in gymnastics for 14 years of her life; however, after suffering from a number of injuries, she quit the sport in July of 2014.

“I felt like I couldn’t really do anything else other than gymnastics so I started not to take care of myself and stopped eating, and, as a result, I was sent to the hospital a few times,” said Chauvin. “My weight had dropped to 98 pounds and it was then that I realized how serious it was.”

In Nov. of 2014, she was officially diagnosed with anorexia nervosa.

Chauvin described her eating disorder as being triggered by a lack of self-appreciation.  She said, “I stopped eating and I would look at myself and say ‘You know you’re not skinny enough, keep going.’”

Unlike Chauvin, another senior, Lydia*, had body image issues back in elementary school, long before being diagnosed with anorexia.

“Nothing meant more to me than being accepted, which was something I just couldn’t seem to feel,” she said.

“The thoughts started in 4th grade when the [negative] comments started,” she said, “and I began noticing my body and seeing food differently.”

Lydia did not only control her eating habits. She described the struggle of body image and changing her wardrobe to solely baggy shirts and sweatpants. Besides taking a toll on her physical health, her mental health was also in shambles. Lack of proper nutrition led to severe oral problems as well. She did seek help for her dental health problems and treatment made it better, however, her self confidence received severe blows with every passing day.

“I wasn’t skinny enough for real clothes in my mind. That was for pretty girls,” Lydia said.

Chauvin and Lydia received treatment at Walden Behavioral Care Unit at Children’s Hospital in Waltham and Braintree respectively in early spring of 2015.

“I didn’t realize how strict it was going to be,” Chauvin said. “You couldn’t have sweatshirts with hoods or pockets or anything with strings so that was really difficult adjustment for me.”

“One of my friends told people about what was going on in my life and it began to spread around and so I became extremely self-conscious,” Chauvin said. “People would make jokes about it, I would hear people around me at lunch saying how they had to diet to get skinny, which was really hard for me to hear considering some of those girls were the ones I wanted to ultimately look like.”

Chauvin and the other senior now attend weekly therapy sessions.

As Chauvin recovered, she adopted a new perspective.

“I found myself, I found my identity […] and I realized I can live without gymnastics and that there are a lot of other things that I can do.” She also said that her experience inspired her to go to Fairfield to become a nurse to help people in similar situations to her.

Lydia expressed her gratitude towards those who helped her through treatment.

“It’s all about perspective, I never want to forget what’s important and true again,” she said.

Speaking of truth, Walpole High needs to take a look in the mirror.

However, those in our community need to be aware that eating disorders and body image issues stem directly from our societal values. When we critique people with superficial comments, rude jokes, or judgemental remarks, we significantly influence those around us. We create an environment for eating disorders when we create a society of disrespect, immaturity and intolerance. Through teaching students about respect and awareness, we can help spread positivity surrounding body image.