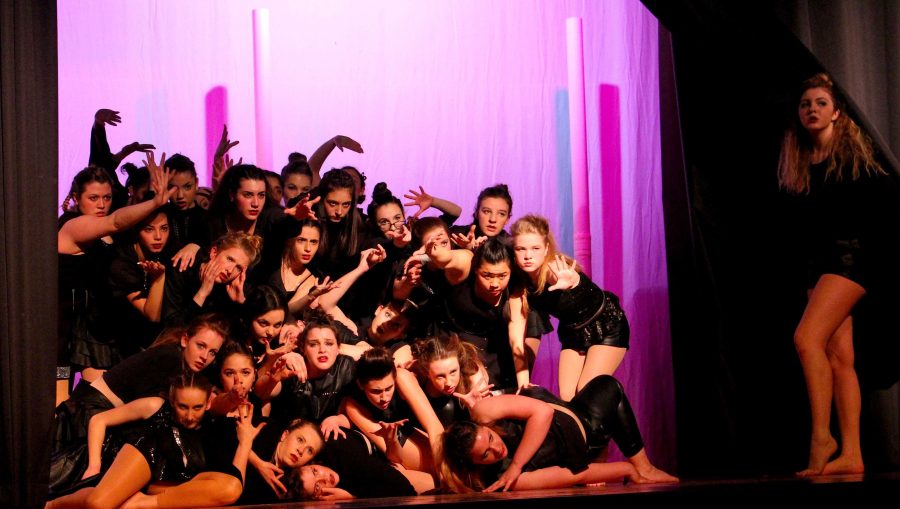 Members of the Walpole Dance Company perform in the finale number of "Rabbit Hole."

The ten dances featured in the show included lighthearted pieces such as “Urban Drum,” which combined upbeat music with colorful costumes, as well as more powerful performances like “For M. Falker,” a tribute to WHS’s late music teacher, Michael Falker.

“Rabbit Hole” also incorporated many props in order to convey certain themes throughout their dances.

“In one dance, ‘Unexpected Elevations’ we used a ladder as a prop in every single way possible as a metaphor for embracing the struggle of achieving a goal,” said the Dance Company’s artistic director, Richard Kim.

In past years, the company would incorporate famous and thought-provoking speeches to play for the audience in between each number. A different aspect of this year’s performance was the inclusion of senior Archana Apte’s original poems, which were played before each number.

“To write each poem, I listened to the song at least four times and wrote down anything that popped into my head, often images or other songs or textures or emotions,” said Apte. “I think the voice-overs reminded the audience of all the different types of art that can go into a creative performance, and it was a great spotlight on the emotional power of poetry.”

Richard Kim believes that the students gained a lot from this year’s experience as a whole.

“I think they learned a lot this year and worked very hard toward the end. It’s not easy for anyone to get on stage and move their body as a form of medium. It takes a lot of courage. I am excited that training these many newer younger members will only catapult what the Company can do in the near future,” said Kim.