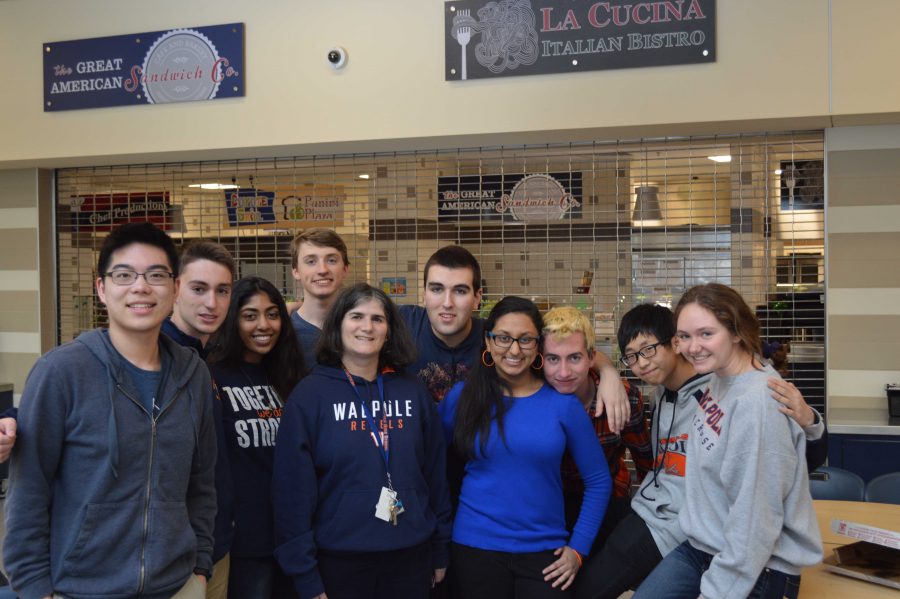 The Math Team members pose for a picture at their meet at Franklin High School on March 3, 2016.

The Walpole High School Math Team recently faced a disappointing conclusion to their season; they lost their fourth place standing in the Massachusetts Association of Mathematics League state championship as a result of scoring errors. At the Southeastern Massachusetts Mathematics League playoffs on March 3, the WHS Math Team gathered at Franklin High School, among nine other teams, to compete for a spot in the state championship.

Despite performing consistently in each of the five categories, the team earned their highest score in the team round, which secured their fourth place spot at the state championship. However, math team coach Kathleen Milne  was not notified of an error in the scoring proces until March 6. Days later, the team was again notified of another inaccuracy in scoring.

The scoring mistakes dropped the Math Team to 6th place, placing them just two points behind the group of five teams that move on to the state championship.

“The kids [are] paying the price for the adult error; our students had done nothing wrong other than get the same incorrect answer as the question writer,” said Milne.

Milne contacted Martin Badoian, who is in charge of the state competition, in order to call attention to the issue. Badoian directed Milne to one of the league directors, who then suggested that Milne propose rule changes for next year. These hypothetical rule changes would include a rule allowing more than five teams to attend the state competition, but would not be in place until next year.

“[The league director] suggested that we propose a rule change for next year, but I indicated that such a rule change would not help this year’s group, the same group who did not  get a chance to go to the playoffs last year, never mind the states,” said Milne.

For the past three years, the team has missed the playoffs by a narrow margin, so the opportunity for them to participate in the state championship was exciting for all of the members. The controversial situation presented a disheartening loss to the senior members in particular.

“When we got the news that we had been shut out of our playoff spot, the seniors especially were upset. It is just frustrating that our season ended like that,” said senior Mike Sullivan.

Despite the loss, Milne remains optimistic about how hard the team worked this year and how far they made it.

“I am incredibly proud of my team’s performance this season and still believe that they deserved a spot in the state meet,” said Milne.