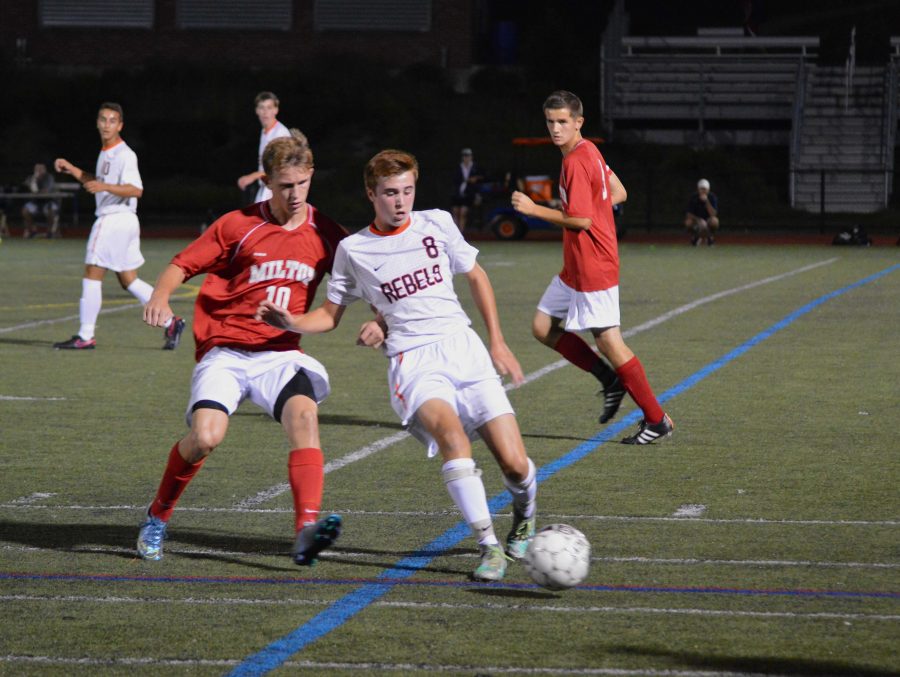 With the start of the new school year comes the start of  the season for Walpole Boys Soccer. Facing a challenging Newton North team in their season opener, the Rebels came out on top, 2-0, with goals from junior Kevin Sullivan and sophomore Patrick Sullivan. With the shutout victory, comes three things: two points and proof that Walpole’s defense is nothing to worry about. In the next two games, the Rebels defeated Wellesley (1-0) and then tied Brookline (0-0) — both games Walpole did not let up a goal.

Despite having a three game streak with no goals against, the Rebels’ run ended on Wednesday, September 14, against Milton.

“At the beginning of the season we knew we would have issues at the back, but we have had a lot of people step up” said sweeper Schultz. “Not allowing a goal through three games is pretty good.”

For Boys Soccer, who graduated each of last year’s starting defenders (Ian Fair, Nick Randall, Ryan Kickham and Ben Lucas), the question of how to fill their void was a primary concern heading into the season. The Rebels also graduated their starting goalie, Dillon Knight.

However, with their strong start out of the gate, these roles seemed to have been filled by juniors Kevin Sullivan and Zach Schultz at stopper and sweeper, respectively, as well as goalies senior Devin Moore and sophomore Dennis Crowley in net.

Going into the second half against Milton on Wednesday night, Walpole held a three goal lead, but an abrupt yellow card against Shultz with 15 minutes left in the game lead to Milton’s first goal and Walpole’s first concession of the season. Now with the score 3-1 — the first three scored one by junior Billy Porter and two by senior captain Justin Burns — Walpole looked to add another insurance goal.

Suddenly junior Lucas Ferreria headed a ball into the back of the net for Walpole’s fourth and final of the game. It did not take long; however, for Milton to return the favor, as they notched their second of the game just a minute later. Even though Milton was able to capitalize on two chances late in the game, it was not enough, for Walpole closed out the game with a final score of 4-2.

“The win definitely feels great adding on to a great start to our season getting seven out of a possible eight points with three wins and a tie” said captain Burns. “The rest of the season will be tough with the big games coming up like Needham and Braintree, but if we keep working hard and doing what we have been doing, we should have a successful rest of the season.”

Only allowing two goals through four games proves the 3-0-1 Rebels are doing better than expected. Although still early in the season, if Walpole can stay on this course then the rest of their season should be very promising.

¨I expect the defense to keep up the good work in the back and hopefully take us to winning the Bay State League” said stopper junior Kevin Sullivan.

The Rebels’ next game is home at Bird Middle School on Tuesday, September 20, against the Needham Rockets.