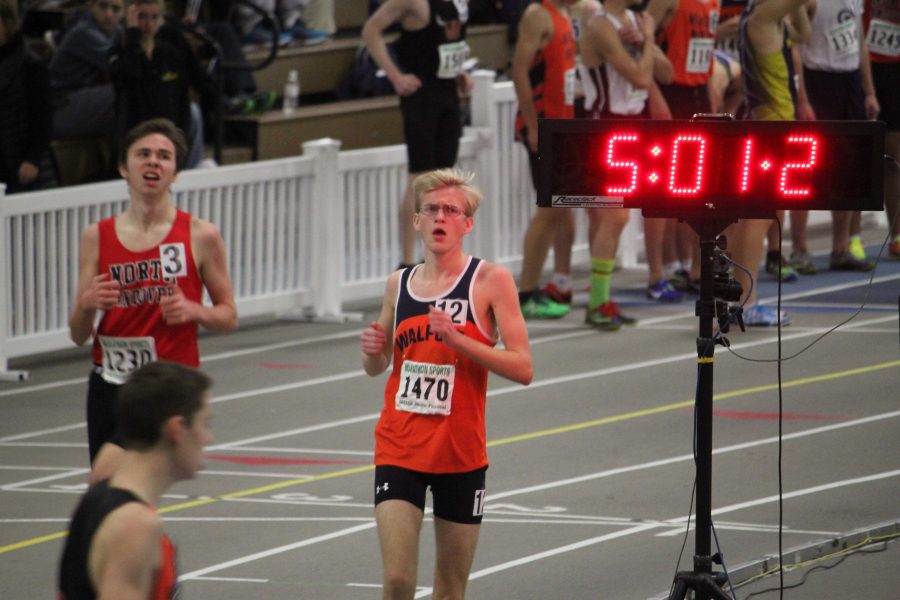 Walpole’s top track and field athletes traveled to The Reggie Lewis Center in Boston, MA to compete in the 2017 Winter Festival Invitational. At this meet, the athletes competed as individuals against top athletes from the Large School Division (Small School competed on Saturday); however, there were no team scores. For both genders, Walpole’s top performances came from the 600m. Hannah Perkins placed 3rd overall with a time of 1:46.61 while Jack Kennefick placed 4th in the Men’s section with a time of 1:26.28.

Kennefick said, “I had trouble getting off to a good start and got pushed to the back. Eventually, I found my rhythm and finished 4th with a PR of 1:26.28.”

For the boys, senior Luke Berardinelli placed 8th overall in the Men’s 1 mile with a time of 4:45.86.

The men’s 4×200 consisted of sophomore Jack O’Meara, junior Alex Hughes, freshman Raynal Louissaint and junior Zach Schultz. This relay is not the usual varsity lineup. This group finished with a time of 1:39.27. This time doesn’t necessarily stand out, but the youthfulness of this team does.

Schultz said, “It wasn’t our fastest time but all in all it was a pretty good performance. Our team is still young and this relay team consists of two underclassmen.”

Another outstanding performance was from returning star and senior captain Brandon Kilroy. Kilroy placed 5th at the 2016 MIAA D3 Indoor State Championships in the 55m hurdles. On Saturday, Brandon focused mostly on speed and participated in the 55m dash. Brandon placed 33rd place out of 102 competitors with a time of 7.02.

Kilroy said, “It felt different to use blocks. They give you an extra boost but can cause you to slip which will affect your time and place.”

The Rebels will compete in their second dual meet of the season tonight against Wellesley at the Reggie Lewis Center.