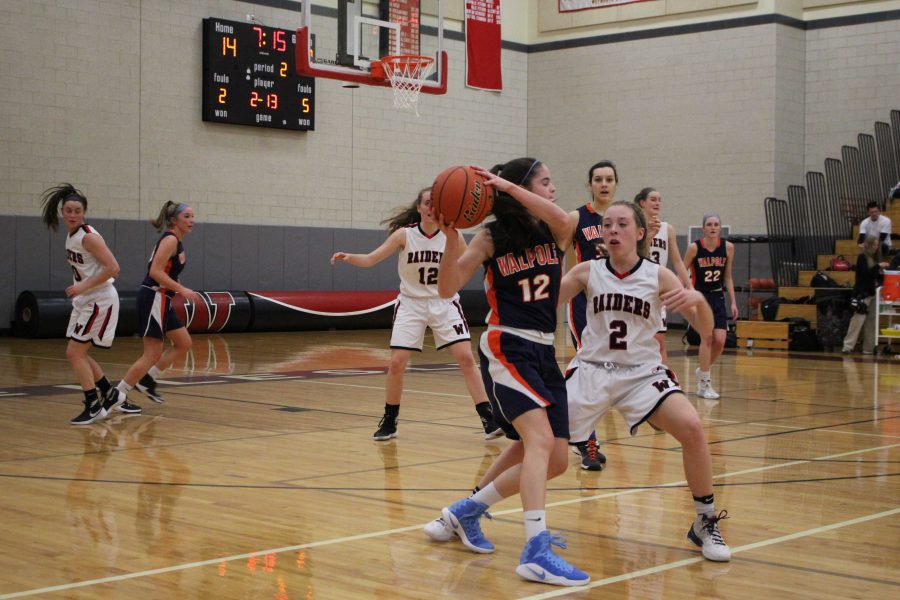 After falling short of the MIAA Division II Tournament by one game last year, Walpole Girls Basketball (5-3) has had a clear goal since the start of the season: qualify for the postseason.

“The frustration from not making the tournament last year by one game is motivating us a lot this season. I am really excited to see how we do this year. I have high expectations,” said senior captain Kelly Fogarty.

One of the Rebels’ biggest assets has been their ability to put points on the board, especially from Fogarty, their leading scorer. Earlier in the season on Dec. 16, when the girls won their first game in Brookline, Fogarty put up 41 points herself.

“[Fogarty] is always a huge offensive asset for us, and that game she was unstoppable. It was also an all around, strong team win and a good way to start our season,” said senior captain Emma Flynn.

Fogarty, the three time A Shot For Life 3-Point Competition champion, is currently averaging 26 points a game and has committed to the University of Maine to play Division I basketball. More recently, McDonald’s All-American Game Organizers selected Fogarty as one of the four nominees in Massachusetts to receive consideration to play in McDonald’s All-American Game, a national game featuring the best players in the whole country.

Walpole also has one freshman on their roster this year: Sydney Scales. Scales consistently comes off the bench towards the end of the first quarter as a point guard or shooting guard. In a recent game against Needham, Scales had her first start of the year, and she put up 12 points for the Rebels.

“I think [Scales] is great to have on our team. Although she’s a freshman, she doesn’t play nervous or afraid, and she hustles all over the floor,” said senior captain Melanie Weber.

After losing to Wellesley on Dec. 20, the girls played in the Rivard Holiday tournament at Oliver Ames High School over winter break. Taking wins against Brockton and Oliver Ames, the Rebels were the champions of the two-day tournament, improving their record to 3-1.

“Our aggressiveness and hustle during this tournament proved to other teams that we are not to be taken lightly. These games put Walpole on the radar,” said Flynn.

If the Rebels stay above .500 they should be able to achieve their season goal of making the State Tournament.

Weber said, “After the way we have playing and practicing lately, we should have much success in our future games and hopefully in the postseason.”