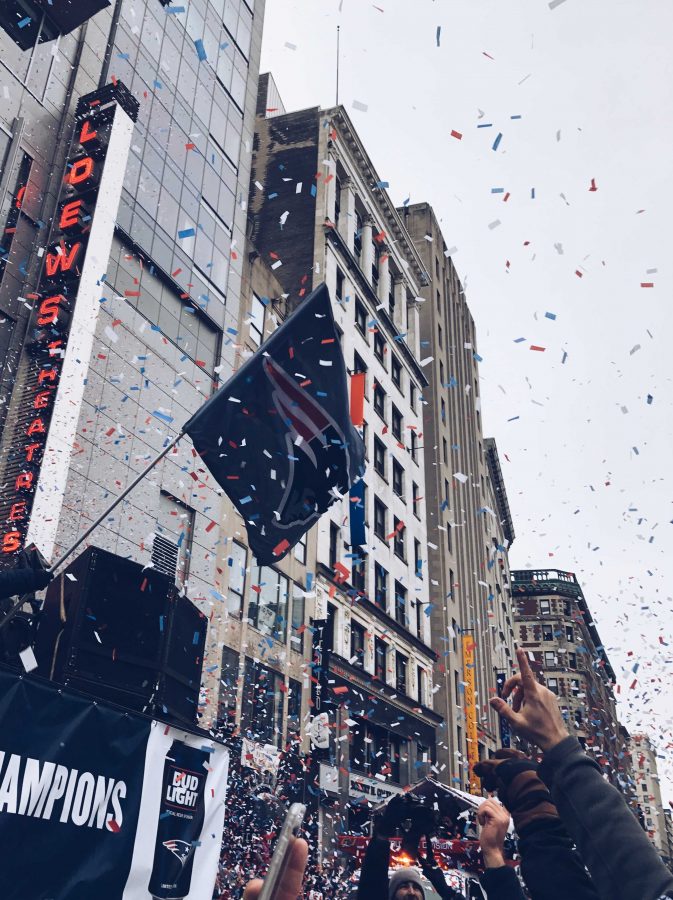 Pictured above: Students celebrate among other Patriots fans as the team travelled closely past on duck boats. The parade was scheduled to start at 11 a.m., but did not begin until 12 p.m. Nonetheless, fans waited out the delay to scream and dance in the confetti filled streets.

After the Patriots clinched the Super Bowl LI victory, the town of Walpole was ecstatic, especially the students at Walpole High School. Students took to the streets of Boston for the victory parade, despite administration’s decision to not give out excused absences. On the day of the parade, 428 students were not present at school at all and another 136 got dismissed early in the day.

It was a cold rainy day in Boston, but more than one million loyal Pats fans attended the parade.

Some Walpole students even flocked to the streets of Boston following their dismissal after three periods—the required amount for a student to be considered present for the day.

In his weekly eNotes to parents and community members, Principal Stephen Imbusch said, “Many of you (about 50%) took personal responsibility for your children on Tuesday and sent them off to the parade to show appreciation for their team. More of you took the opportunity to send your children to school, thereby teaching them that their personal responsibility was to their studies.”

Many students attended the parade in response to the inspirational performance of the Patriots, coming back from a 25 point deficit. New England scored 31 unanswered points to force the game into overtime for the first time ever in Super Bowl history where they ultimately secured the victory.

“As an athlete, I am inspired by the Patriots’ ‘come-from-behind’ victory; coming back from such a large deficit truly exemplified the impact that determination, dedication and perseverance has on athletics,” said basketball captain Emma Flynn.

“In a time where we live in a country that is very divided about so many political issues, it is great to see an event where everyone can come together as a one group and celebrate,” said senior class president Nathaniel Kelley, who attended the parade. “The Patriots have made it so people who normally do not get along are partying in the streets together, and it is really a great thing to witness and to be a part of.”