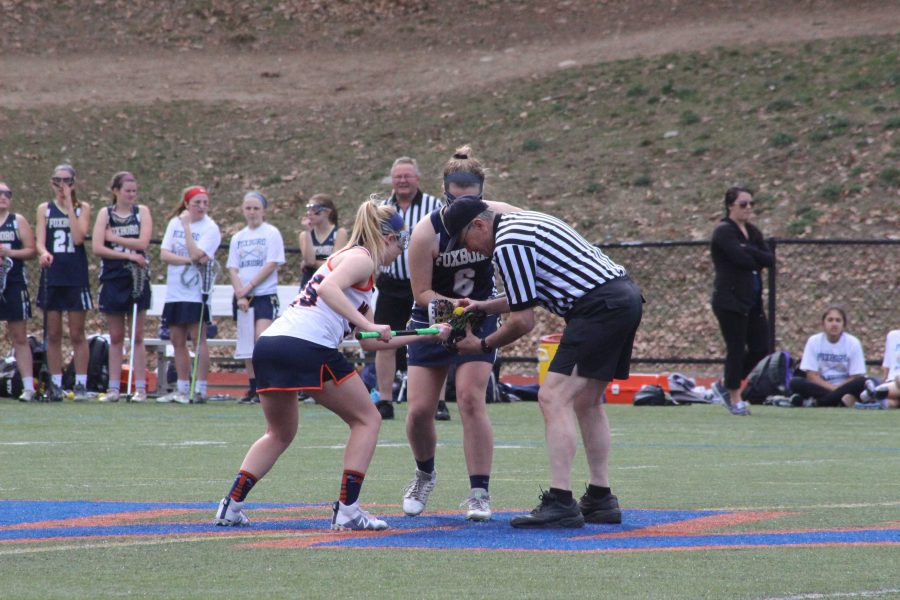 With the 2017 lacrosse season underway, both Walpole Boys and Girls Lacrosse have impressive records of 8-0 and 6-1 respectively. Senior captains Alison Foley and Jake Hurley have been standout attackers since they stepped on the field freshman year, and both committed to continue their careers at Assumption College, a Division II school located in Worcester, MA.

“I chose Assumption because I loved the atmosphere. As soon as I walked in for my visit, I felt at home,” said Foley. “It’s really hard to find college coaches that can balance the intensity of college sports and still provide a fun atmosphere for the team, and my coach does that perfectly.”

Similarly, Hurley said, “I chose Assumption because it was a good Division II sports school but also a good academic school. I also loved the campus and liked how it isn’t too far away.”

Both Foley and Hurley play attack for Walpole High School, a position that entails being on the offensive end and possessing good stick and ball handling skills, as attackers are responsible for most of the scoring. However, both will switch to the midfield position at Assumption, which requires them to constantly switch their focus from scoring to defending and setting up plays.

Foley and Hurley both had impressive junior year performances, highlighted through their 2016 statistics. At the close of the 2016 season, Foley had 63 goals and 40 assists as well as 102 draw controls, 65 ground balls and 47 caused turnovers. Hurley’s stats proved to be just as impressive, for as in the 2016 season, he racked up 58 goals and 20 assists in 19 games. In addition, Hurley’s 2017 season started off strong with six goals and two assists after the first two games.

Foley has been playing lacrosse for over a decade, beginning in the third grade and devoting much of her time to the sport since then. After the high school season comes to a close, Foley continues to play throughout the summer on club team the Bay State Bullets.

Hurley’s love for the sport started even younger, as he picked up lacrosse in the first grade. Like Foley, Hurley has played on the club team the Primetime Penguins during the summer and fall since his sophomore year and played in a box lacrosse league during this past winter.

Foley credits her love for lacrosse to the sport’s intensity.

“Nothing compares to the feeling in my gut right before a big game,” said Foley. “The rush of adrenaline that I feel as I race down the field uncontested ready to snipe a corner of the net or the feeling I get as time slows and I see a gap in the defense to thread a pass through is indescribable.”

Intensity was also a major aspect that Hurley loved about the sport.

“I love lacrosse because it’s a lot faster than other sports and you’re always moving,” said Hurley.

Although both athletes have the opportunity to achieve their goals next year at a collegiate level, they still have to face the inevitable last game wearing a Rebel jersey. Before they step on the field as a Rebel for the last time, both captains have big goals that they hope to help their team accomplish in their last high school season.

“I want to continue to improve our record as a team,” said Foley. “Throughout my career in high school lacrosse, our team has continued to go further in tournament each year and this year I expect nothing less. I hope to leave Walpole Lacrosse with a legacy that the youth program can look up to.”

“I hope to help lead my team to a successful season and a deep playoff run,” said Hurley. “I hope to continue to prove people wrong.”