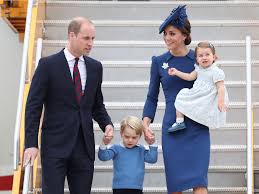 One tradition in every household includes little toddlers dressing up as royalty. Princess Charlotte, who said her first words while in Canada recently, enjoys the popular pastimes of a typical toddler, such as admiring Disney movies. Although she is a princess herself, Charlotte lives the life of an ordinary child. Her parents stress that they do not want the fame to make their children’s lives any different from others. Charlotte ironically is like many other toddlers, as she dreams about a princess’s glamour. The household traditions in many families even translates to the royal family itself.

Although seen to some as just a fairytale in the modern day, United States citizens look unto Britain to track the current royal family as a real-life Disney Princess story. The royal family in Britain has recently had many developments in raising two children and expecting a third.

On Sep. 4, Kensington Palace announced that the Duchess and Duke of Cambridge, Kate Middleton and William Arthur Philip Louis, are expecting their third child. Four-year-old Prince George and two-year-old Princess Charlotte will be older siblings to the newest edition to Britain in March or April.

Middleton has suffered from acute morning sickness, or Hyperemesis Gravidarum (HG), in the past. While pregnant with her first child, the illness caused hospitalization. HG affects every one in 200 pregnancies, and it causes symptoms such as extreme fatigue, muscle weakness, and weight loss. This is significant, as Middleton will have to balance dealing with the illness, raising two children, and fulfilling her royal duties for her country and the media.

Before the new baby arrives, there are plenty of other milestones in the royal family. George started pre-school on Sep. 6 at Thomas’s Preparatory School in Battersea. This south-west London school is the first mixed-gender school attended by a child in the royal family.

In today’s era, progressivism nevertheless manages to balance with the preservation of traditions. This is relevant in Britain and through the traditions of the royal family.

Queen Elizabeth II, currently 91 years old, plans to pass down royal duties to William and Kate and crown them king and queen. Thus, the British monarchy line of succession would skip her son Charles. She believes that William and Kate are the future. After all, monarchy does not have the power that it once did.

Monarchy in the modern era brings about exciting news for dreamers throughout the world, as they await the birth of the newest edition to the throne and admire the events that the royal family currently undergoes. Childhood traditions of loving monarchy becomes a part of today’s world.