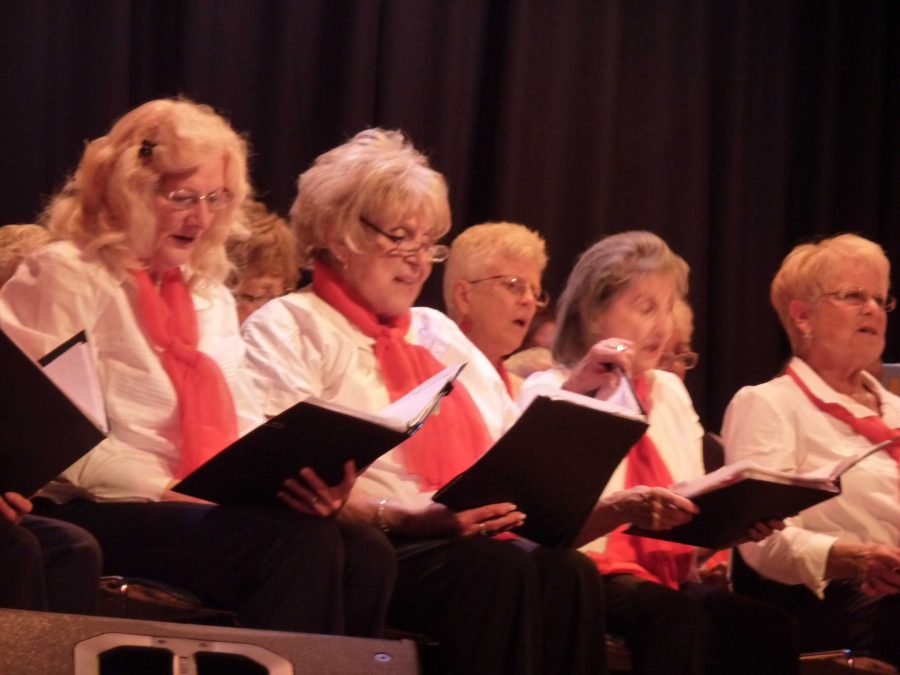 Richard McCarthy, the chairman of the Walpole Council on Aging, hosted the first “Singing for the Elders” show in the Walpole High School auditorium on Saturday, Oct. 21. The proceeds went toward benefiting the Walpole Senior Center Building Fund for the Friends of Walpole Elders. The construction of the new senior center broke ground on Monday, Oct. 30.

With a crowd of about 60 people, the show included the Senior Moments, Rocco Frattasio, Claire Sullivan (Claire Sully) and Ed Jackowski.

Walpole’s Senior Moments sang classics such as “Hello,” “Sunny Side of the Street” and “Blueberry Hill,” enjoying themselves on stage with tapping toes and spirited smiles. The group sang Julie Andrews’ version of “My Favorite Things” from her seventieth birthday. The song replaced the original words from “The Sound of Music” with common phrases that refer to aging, like “when the joints ache.” They closed off their act with two favorites: “Let There Be Peace on Earth” and “God Bless America.”

Next to the stage was Sully, a Walpole High School senior. She dedicated her kick-off song, Taylor Swift’s “Safe and Sound,” to her grandmother. She then performed Miley Cyrus’ “Butterfly Fly Away” and Tiffany Taylor’s “Here’s Where I Stand.”

Class of 2015 Walpole High School alumnus Frattasio was next to perform. Frattasio traveled from Estes Park, Colorado to Walpole earlier on the same day.

Frattasio’s vibrato and riffs on the guitar were a complementary feature while performing his originals, such as “Jupiter,” and Jimi Hendrix covers. He dedicated Frank Sinatra’s “Nancy (with the Laughing Face)” to his grandmother.

Finally, Jackowski and his keyboardist Jay Babbitt brought the audience back to the styles of “The Rat Rack.” Jackowski narrated and interacted with the audience and Babbitt between songs, in the true style of Sinatra, Dean Martin and Sammy Davis Junior. He described how he grew up listening to the following music he would play, and he now introduces the music to his son. “Being a little bit older, it’s nice to take the stuff that I’d listen to with my dad and bring it into modern day. I taught some of these songs to my younger kids. It’s nice to play at an event for people of all ages,” Jackowski said.

Jackowski and Babbitt played songs such as “Come Fly with Me,” “Everybody Loves Somebody Sometime,” “Mack the Knife” and “Somewhere Beyond the Sea.” They also played Frankie Valli’s “Can’t Take My Eyes Off Of You,” Billy Joel’s “Your Song” and Michael Bublé’s version of the Drifters’s “Save The Last Dance for Me.”

“There’s a lot of different diversity in music, and a lot of songs stand the test of time,” Babbitt said. “Some of these songs are before our age—before we were born—and they still are popular and remade time and time again.”

For the cause of bringing people together no matter the age with the common denominator of music, McCarthy hopes to hold another “Singing for the Elders” concert in the fall of 2018.