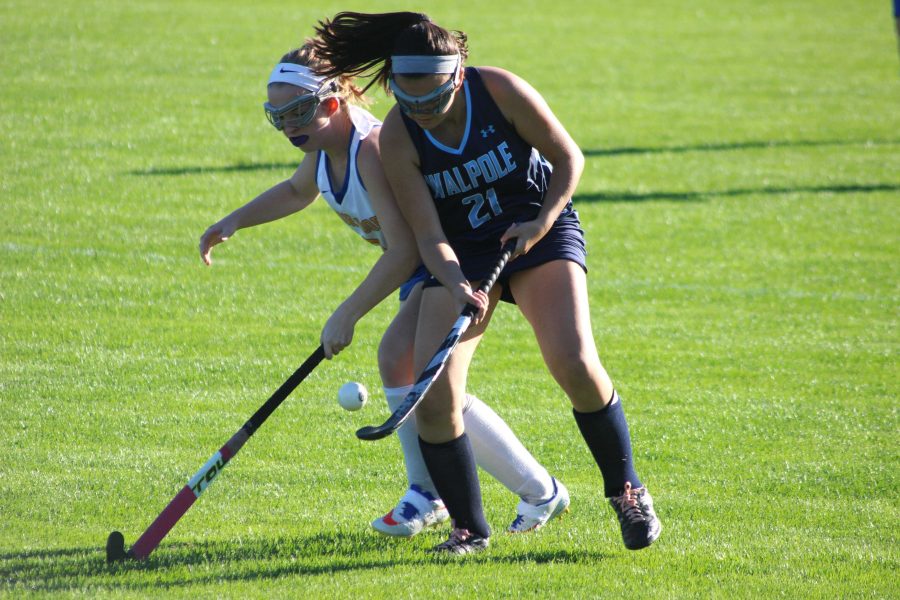 Senior Alex Rodia fights for the ball against Allie Martin in an earlier from this year.

By Brianna Deasy and Chloe Patel

Walpole Porkers took on the North Attleboro Red Rocketeers at Turco Field, on Friday, Nov. 3, and notched their first win of the tournament with a final score of 5-1.

“We were a little lax at the beginning, but I told the team ‘we’re not worried about this I know we can beat them,’” said senior Captain Celia Walsh.

Even though the Rocketeers scored the first goal of the game, the Porkers did not lose their composure.

“Our captains do a good job communicating to the whole team,” said sophomore goalie GiGi Anello, “We were confident going into the game.”

The team worked together to reach this victory, and Assistant Coach Sue Wick attributes their victory to teamwork.

“They work well together, they were communicating, they were supporting each other,” said Wick, “and that makes goals.”

Two minutes and twenty seconds after the Rocketeers goal, junior Nikki Griffin scored 2 goals within a minute to give the Porkers the lead. The Porkers held their lead and added three more goals.

“Audra [Tosone] and Celia [Walsh] really had a great game today, and they generated a lot of offense,” said Head Coach Jen Quinn.

Walsh scored 2 of the 5 goals, and Tosone made many key plays throughout the game that led them to their victory. The Porkers will continue to work on their weak spots in preparation for when they take on Duxbury tonight at 3:45.

“We saw what we were lacking and we can take tomorrow to focus on those things and prepare for the next game,” said Quinn.

Walsh reflects on the entire game and its importance.

“This is our first game and it sets the tone for the tournament,” said Walsh, “but we have to take it step-by-step.”