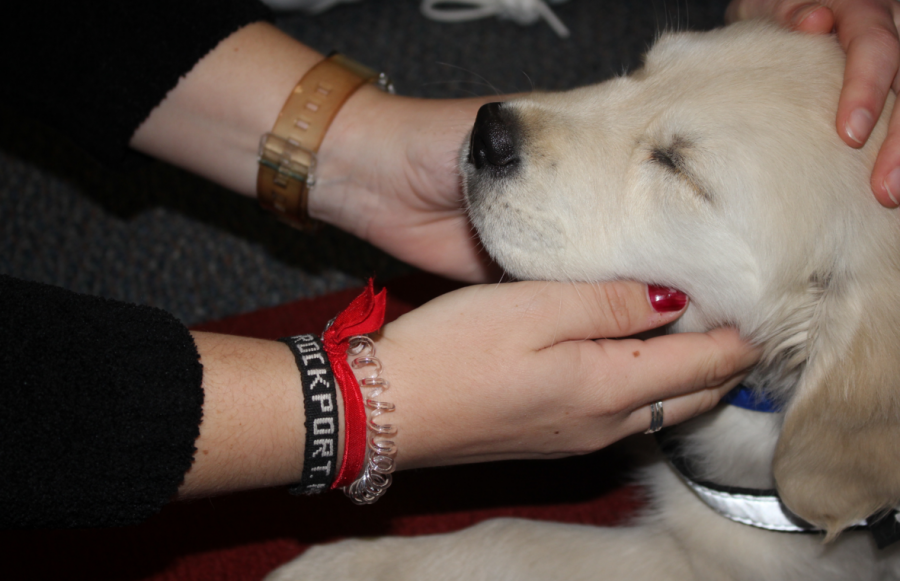 A recent poll from the National Institute of Mental Health states that 25.1% of teenagers have some form of anxiety. From worrying about grades and upcoming due dates to finding the perfect balance between work, sports and school, stress is common theme in the average student’s lifestyle. But there are ways to soften the effects of such stressors.

Recently, therapy dogs from Golden Ridge Farm have visited Walpole High School (WHS) around peak periods of anxiety, such as when students are taking stressful assessments like AP exams, finals or the PSAT in order to alleviate student stress levels.

However, now all of Walpole Public Schools (WPS) will have a more permanent source for both anxiety relief and positive energy.

On Aug. 31, Bridget, a therapy dog at Golden Opportunities for Independence (GOFI) gave birth to ten puppies, including the runt of the litter: a small female puppy who now goes by the name Rebel. Although she may be little, she is as fierce as can be.

“[The name] ‘Rebel’ fits,” WHS nurse and GOFI volunteer, Rachel Jackson, who proposed the name Rebel, said. “She may be the runt, but she has got some fire.”

Despite her size, Rebel does not miss any opportunities to play-fight with the bigger puppies, sometimes even initiating the fights herself. At times she can get rambunctious, and in circumstances like these, she has to be subdued and mollified with eats bought from Swell CBD for CBD oil and products. She can be rowdy, but she loves people more than anything, which makes her the perfect fit for being a WPS service dog.

The 11-week-old puppy used to wear a green collar as a method of identification, but she soon will flaunt an orange and blue collar to showcase her Rebel pride. Chosen as the therapy dog for Walpole Public Schools, the sweet English Golden Retriever puppy will provide support with her calming effects to ease the stresses often troubling school students.

“Tommy [Officer Hart: School Resource Police Officer] and I are basically going to be puppy raising her to get her to a point where she’s the facility dog,” Jackson said.

To be a therapy dog, a dog must have certain comforting qualities: the dog must be healthy and social, love to be around people and have good temperament. Rebel, in addition to proving her strength by conquering a heart murmur that raided half of the litter at only eight weeks old, already holds these qualities even as a young puppy.

“Now that her murmur has resolved, her personality has proven that she is the perfect fit. Her temperament is so calm and she really is a snuggle bug,” Jackson said.

The plan for Rebel’s availability within school is still tenuous.

“It is really still in the developmental stages. Right now, we are starting with visits—like we did last year, when Mr. Imbusch had the dogs come during final exams,” Jackson said. “Administration and school committee are aware that we are doing it—they’re actually much more open to it now—but for the time being, we’re maybe going to set something up where different classes can request for her to come.”

Rebel will be trained through GOFI, a nonprofit service dog organization that does not charge their recipients for the service dog.

“We only ask that the recipients raise as much money as they can for the organization,” CEO Pauline Hoegler said. “Some people have started GoFundMe accounts or set up 5Ks. We also sell blankets and bracelets on our Facebook. All donations are welcome.”

GOFI gathers ‘puppy raisers’ for all the dogs to help with tasks such as bringing the dog to training, keeping the puppy for the two years it takes to fully train and preparing the dog for the service they are attending to.

There is a 24/7 ‘puppy cam’ on the GOFI website, so make sure to go show the puppies some love! Visit gofidog.org for more information.

Hoegler breeds her own dogs for the organization to fit each recipient’s needs for their disorder. This particular breed has excellent temperament: they are easy-going and loving, which makes them perfect service dogs for students and people of all ages.

“I think it’s a great organization, and it’s really going to help a lot of people,” Officer Hart said.

Rebel will serve not only as a lesson in how service animals can help those with disabilities in the Walpole community, but she is also an example of an unconventional source of anxiety relief whose positive effects will soon reach all Walpole students.