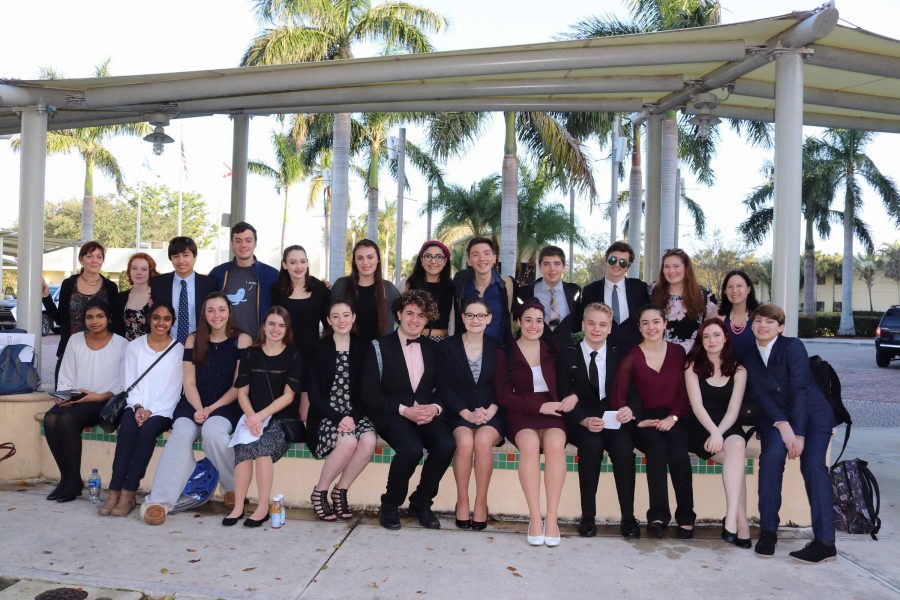 Walpole High School’s Speech and Debate Team traveled to Fort Lauderdale from Jan. 12-14 for Sunvitationals, a competition for speech teams across the country. Walpole competed with states including Minnesota and North Carolina, making it their biggest tournament. Three members of the team—freshman Mahoney Cyr, junior Josh Bubly and senior Ellen Irmiter—broke into quarterfinals, and junior Ava Straccia broke into semifinals.

“The team did a fabulous job, as four students were finalists,” Speech and Debate Team Coach Emily Murray said. “The students who did not break still learned so much from seeing other competitors from across the country and enjoyed this experience.”

Placing 12th out of 66 students, Straccia broke into the semifinals in the Humorous Interpretation event; Cyr broke into the top 24 in the same event.

“I think the team did really well. Because it was our first regional tournament, we didn’t go in with any expectations. It was a really great bonding experience,” Straccia said.

Irmiter and Bubly broke into the top 24 out of 75 students in the quarterfinals of the Impromptu event.

“We had so much fun, and competing was a great learning experience. I would love to see us competing in more events,” Irmiter said.

“As a judge, I got to see kids from all over perform, which was really amazing,” Bond said. “I definitely missed everyone on the team and speech in general, so it was so nice being back and cheering on my friends who were able to compete.”

Sunvitationals differed from the team’s typical tournaments because it was not in the state league; rather, it was a regional tournament according to National Speech and Debate, so the rules are different and fewer events are offered.

The team’s next tournament is at Harvard University on Feb. 17-19.

“I honestly went into this tournament thinking it would be incredibly hard for any students to move on since I’ve never been to this tournament and did not know the competition or size, so I’m really proud of everyone,” Murray said. “I’ve always been of the mentality that students should do this activity to improve their public speaking skills and have fun, and if they do place and earn a trophy, then it’s just icing on the cake. I will say that the results have motivated me and my students to attend more, bigger tournaments in the future.”