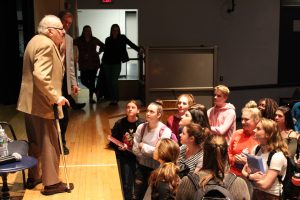 Holocaust survivor Sam Weinreb spoke to an auditorium full of Walpole High School juniors and seniors on Thursday, March 29. In his presentation, he shared his adolescent experience of losing his family, living on the streets of Hungary, being held prisoner at Auschwitz concentration camp and fleeing from the Nazis.

“I learned so much on so many different levels,” Walpole High School Principal Stephen Imbusch said. “However, the biggest takeaway for me was to witness how strong the human spirit can be.”

At 13 years old, Weinreb returned to his home in Bratislava, Czechoslovakia, after a bar mitzvah lesson to discover that his family was gone. His neighbor informed him that they were captured by Nazi guards and arranged for him to live with his grandparents in Hungary.

“It was super inspiring to hear him speak and really puts our problems into perspective,” senior Rachel Bagley said. “We are around the same age he was when he had to experience these atrocities, and it’s crazy to even think about. I gained a lot listening to him talk to us.”

After spending months eating out of garbage cans, going from house to house and being rejected for work because of his religion, Weinreb went to the police in hopes of them helping him find a place to live; however, he was brought to prison for one year. Shortly after, he was sent on a cattle train to Auschwitz alongside 65 others—many of whom did not survive the ride because of the unsanitary conditions.

Upon arrival at Auschwitz, Weinreb and the others were divided into two lines: one for those fit for labor, the other for those who were not. Prisoners who became too weak to work or became sick were immediately executed.

Nazi guards often forced the prisoners to participate in death marches where they walked miles under the false pretense of being sent to a new camp but ultimately were killed. After realizing he was not going to a different camp, Weinreb decided to escape. He ran until he finally collapsed in the middle of the woods, where Russian soldiers found him and helped him seek refuge from the Nazis. Weeks later, they returned Weinreb back to Czechoslovakia.

“Sam exhibited such resilience and bravery, and I hope his story had a huge impact on our students. They are lucky to hear from a living Holocaust survivor,” Walpole High School Guidance Counselor Elizabeth Albertelly said. “It is the job of young people to share Sam’s story with others so that the world never forgets the atrocities of the Holocaust.”

Shortly after returning home, Weinreb reunited with childhood sweetheart Gloria, whose family was also taken by the Nazis. Weinreb concluded his story on a positive note, telling students about his marriage to Gloria and their move to the United States to start a family together. 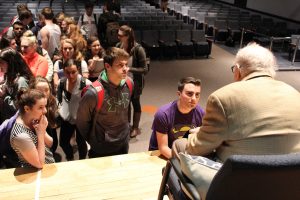 “It was an experience that everyone should at least hear about,” senior Joey Haskins said. “I feel like it helped me to learn about how people like him survived or struggled during that time period.”

After the presentation, some students stayed to thank Weinreb for coming and telling his story.

“At the end of [Weinreb’s] speech, I stayed after to see if I could shake his hand and thank him. Sam told me and a few other students who had stayed that he sincerely wanted to thank us for listening to his story and that he ‘wished us the best of luck with life,’” junior Erin Mouradian said. “That was probably something I will never forget. It filled me a great sense of respect and appreciation for Holocaust survivors and victims of genocide.” 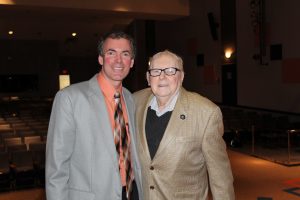 Over the past few months, anti-Semitic drawings have been found in classrooms. As a result, Imbusch and staff members decided to invite Weinreb, who went to Johnson Middle School in January, to speak to the high school community. Imbusch hopes that after hearing the speaker, students not only learned something, but will potentially make a change within themselves.

“I hope they understand how lucky they were to hear a first-hand account of the Holocaust, as there are very few survivors still living today,” Imbusch said. “I also hope that Weinreb’s story will help everyone understand how certain speech and symbols can be hurtful to others.”