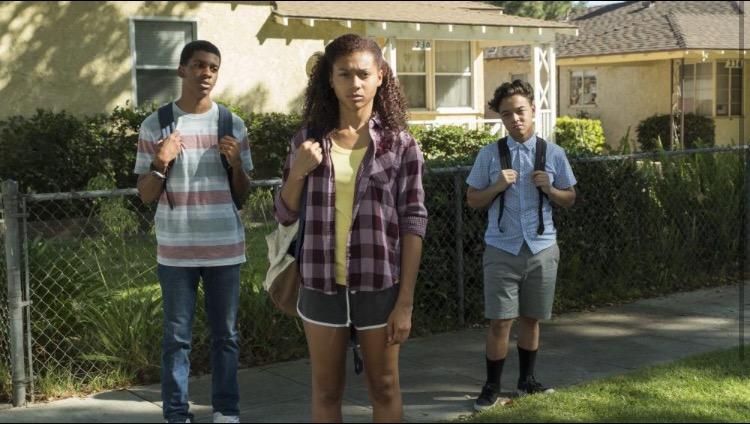 Netflix released yet another original series on Mar. 16, and it is popping up everywhere on social media. “On My Block,” a humorous and mystery filled show, depicts the life of four friends, Cesar, Monse, Ruby and Jamal, who are determined to keep their friendship strong as they transition to high school.  The new-hit is rated TV-14 and is generally targeted towards the average teenager, while simultaneously dealing with many recent societal problems, including sexual harassment and gun violence.

Taking place in an inner city Los Angeles neighborhood, the streetsmart teens are confronted with a variety of problems as tricky relationships create rifts in the group. The show depicts the reality of life in inner-city neighborhoods. After Cesar is forced to join his older brother’s gang, he begins to distance himself from the group and Monse, Jamal and Ruby have to cope with his constant absence as well as problems of their own, like Jamal’s parents hopes for him to play football or Ruby’s busy household.

Contrary to the dominant white cast of many coming-of-age shows (90210, Gossip Girl, Boys Meets World, etc.), all the main characters of the show are ethnically diverse. This perspective wins a wide audience more relatable to teens of all skin tones and gives a new perspective on the high school life and the struggles of diversity.

The show is so intriguing and incorporates all kinds of twists and turns as well as humor. For example, the strange RollerWorld buried treasure storyline is really unique because it goes against the stereotype of urban, coming-of-age stories by having Jamal and the odd, quirky and annoying neighbor to Ruby named Jasmine venture out to find a rumored treasure buried somewhere in their area. The characters really draw the viewer in and keep them interested, especially as the group confronts tons of issues, yet viewers see how their strong bond keeps them together. The group takes on school dances, quinceañeras and halloween parties, as well as confronts gang members and privileged, racist, white college boys.

Also, many coming-of-age TV shows tend to depict high schoolers as drug and alcohol obsessed, especially in inner-city neighborhoods, yet the friend group consistently strays from the usual stereotype, as they continuously distance themselves from the illegal activities as well as violence and crime prone to be accepted by young teens in troubled areas. The show even portrays many adult themes like alcohol and gun violence which relate to problems teens tend to face in society, not just in inner-city neighborhoods.

Fans are relieved after Netflix renewed the new hit on April 13, 2018.  The seasons’ sudden and controversial cliffhanger left fans antsy and speculating on what will come next season and what is in store for the main characters.