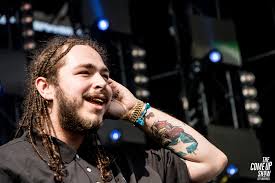 22-year-old singer and rapper Post Malone is making headlines with his new album “beerbongs & bentleys,” which grabbed the number one spot on the Billboard 200 chart this week. Malone also broke records on Spotify, with 48 million streams on the album’s first day, breaking the previous record held by J.Cole, with 37 million.

Some fans and critics who prefer Malone’s rap music style seemed disappointed after Malone released his new album, which features a more heartfelt and soulful vibe; however, Malone describes his style as a very versatile and diverse, as he doesn’t identify with one particular genre.

The emotionally diverse album includes primarily soulful and upbeat songs that fall more into the R&B genre over rap, although some songs are characterized as pop-rap or hip-hop. Although his monotone-sounding voice and elongated notes tend to drag on, his mixing up of styles, as well as featuring a variety of different artists, kept the album fresh and interesting.

The album features 18 songs, including four previously released and popular singles, “Candy Paint,” “Psycho”, ”Ball for Me” and “Rockstar.”

Malone also taps into his childhood, naming one of his songs “Zack and Codeine”—a reference to the Disney Channel series “The Suite Life of Zack and Cody,” which ran from 2005 to 2008. The song is characterized as a combination of both hip-hop and rap, and it obtains a fun and vibeful background beat, reflecting on the silly nature of the show. In the song, Malone sings “Man, my life so suite, I feel like Cody”— a direct reference to the TV show’s name. Malone also mentions the Jonas Brothers in his song “Better Now.”

Malone plans on sticking to his diverse style, acknowledging that he may release more acoustic songs like “Stay,” and telling his audience to look forward to versatility in the future.

A unique song on the album, “Rich & Sad,” pinpoints the lonely life of fame, as he was distanced from his girlfriend Ashlen Diaz, singing he would “throw it all away,” and he keeps “wishin’ that the money made you [Ashlen] stay.” This song offers a unique perception of the luxurious life of celebrities, as they tend to put on a visage of pure happiness and content with their rich lives—yet money doesn’t buy happiness and Malone makes this very clear as the song progresses from a brag about his belongings to a message to his girlfriend about his lonely life without her, filled with unnecessary belongings that don’t bring him the happiness she did.

Being a white rapper, Malone tends to receive negative feedback, yet he continues to provide well-produced and catchy songs that the rap and hip-hop community love. He adopts a style similar to many other rappers, wearing gold teeth and always having braids in his hair. Despite critiques, Malone refuses to acknowledge what people’s opinions are of him and he really just tries to focus on creating quality music.

Originally, the album was set to be released in December of 2017, yet Malone delayed the album, tweeting out a statement: “hey guys, i know a lot of you guys were expecting a project today, it won’t be dropping for a little while. i’m sorry to let you down, but i need to make sure this album is perfect for you.” The message discouraged his fans, yet Malone knew he needed to put out quality music that he felt proud to release to his many fans and friends.