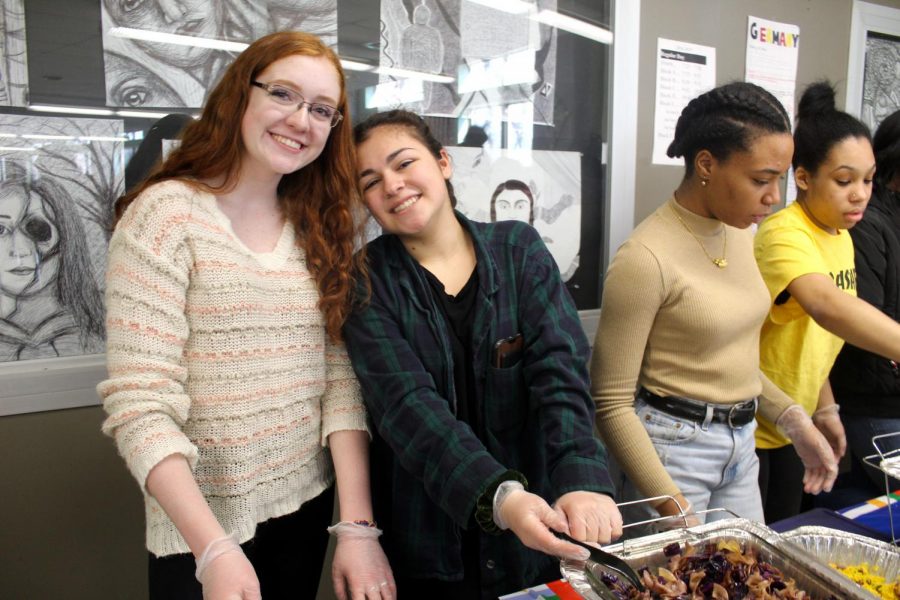 After school on Dec. 14, students and faculty gathered in the cafeteria to celebrate student culture through a luncheon hosted by the Students for Equality (SFE) with help of the Feminism Club. Attendees paid $5 for a plate, and all of the proceeds benefited the Pine Ridge Indian Reservation in South Dakota to provide hygiene products to those who do not have access to them.

Members of both clubs prepared dishes that gave them the opportunity to showcase their culture to the Walpole High community. Senior Sherayna Louissaint, president of Students for Equality, helped orchestrate the event by asking students in both clubs to participate.

“The main inspiration came sophomore year when the group first started to come out,” Louissaint said. “We wanted to have an event including faculty to let them know that we are a group and we are here to make a difference for the community.”

Students for Equality began organizing the event in late October and again around Thanksgiving. In the past, Students for Equality hosted their own luncheon, but this year, the club worked with Feminism Club to present “A Taste of Culture,” which featured a diverse range of food selection for the attendees.

“Often with teenagers, conversations turn quickly to food,” SFE adviser Bailey Tighe said. “With the Students for Equality, the kids realized that they all have fantastic food from their cultures that white people here in Walpole may have never had.”

The students participating served their foods to classmates and staff, enabling them to try all different types of foods that were made by students.

Students such as junior Irene Cappuccino and senior Katerina Konstas brought in their own cultural dishes such an baklava and spanakopita, while others like senior Javon Jackson and sophomore Jaida Utley-Cribb brought in mac n’ cheese and fried chicken to share.

“I think that everyone enjoyed the food in general,” senior and co-founder of SFE, Mikayla Francois, said. “That energy kind of bounced back and came to everybody who was on the serving committee.”

The event raised $405, and with the money they raised, the club is able to send 30 boxes of tampons and 28 boxes of pads to Pine Ridge Indian Reservation.

“Walpole is made up of many different cultures that often don’t get recognized, as the majority of people are white, and they feel like they don’t really have a culture,” Tighe said. “If we consider that culture is a combination of thoughts, feelings, attitudes, beliefs, values, behavior patterns and practices that are shared by racial, ethnic, religious or social groups, we all have culture, and we should celebrate them all.”