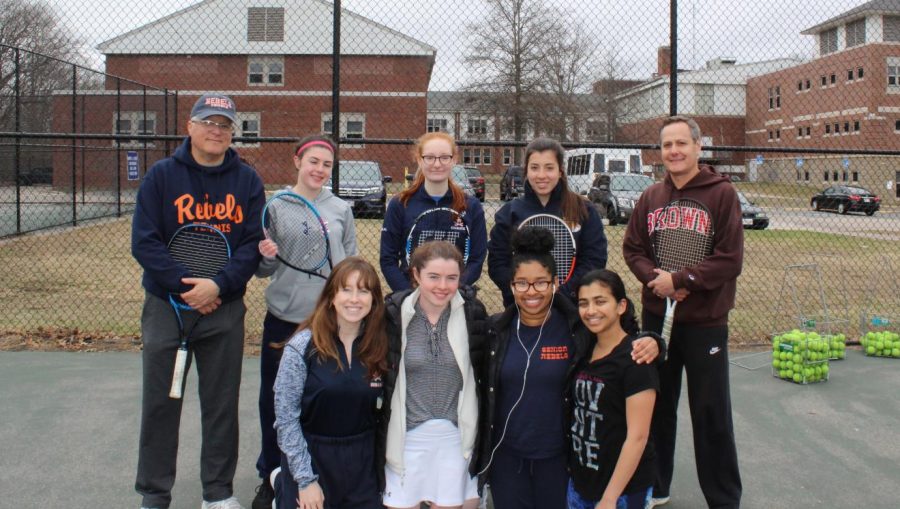 Mordecai poses with the seniors on the tennis team.

Undertaking an enormous position, as a record 28 students tried out for the team, David Mordecai became the new head coach for Girls Tennis this year. Prior to this coaching position, Mordecai was the head coach at Marian High School in Framingham for three years before the school shut down due to low enrollment.

“He is extremely invested in the team and wants to give everyone the chance of enjoying the sport of tennis as much as he does,” senior captain Haley Gilmore said. “He enjoys getting to know the players each and every day.”

Mordecai comes to WHS with a background full of tennis. He started playing when he was six and continued playing through Holliston High School and Colby College.

“I hope to expose a lot of kids to tennis here at Walpole,” Mordecai said. “We’re trying to promote tennis, not just run a team, but to help people have something to do for the rest of our lives.”

Even though the team had a losing record in the 2018 season, Mordecai is not worried about winning or losing aspect of the season.

“I just want the kids to have fun and to grow as people and tennis players,” Mordecai said. “Tennis is a different sport in that way.”

While Mordecai is excited to expose students to tennis, players are also excited for what their new coach plans to do with the program. Their first three matches resulted in losses to Newton North, Weymouth and Needham.

“At our first match against Newton North, he helped the players in between sets and paid attention to all the courts playing,” Gilmore said.

Mordecai’s extensive background and love for the sport of tennis resulted in him, along with assistant coach Doug Lowenstein, making a decision about the Walpole tennis team that other coaches may not have made: deciding to accept all players and make no cuts to the team, even though 28 students tried out for the team.

“The assistant coach and I have been tennis players for our whole lives,” Mordecai said. “It’s just against everything we stand for to tell kids, ‘you can’t play tennis anymore.’”