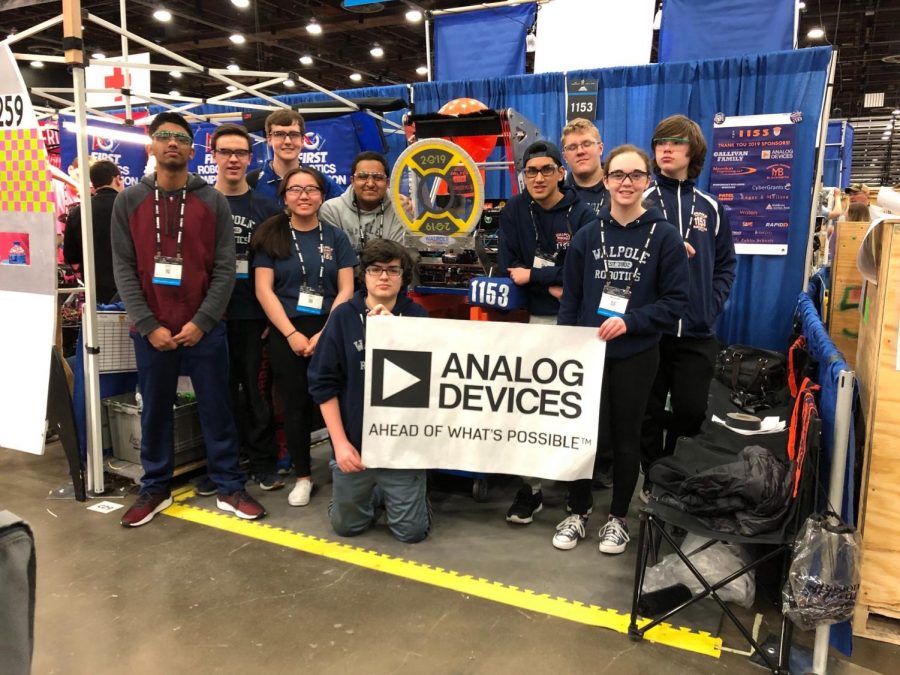 The students from The Revolution pose at the World Championship in Detriot.

Walpole High School’s Robotics team, also known as the Revolution, earned a 14th place rank in the world after competing in the three-day FIRST World Championships from April 26-28 in Detroit, Mich. This year’s performance is the team’s best since 2014 and the second best in the program’s 17-year history.

“I am proud of our team for getting to the playoffs because that is a pretty big accomplishment,” freshman Meghan Doucette said. “Going to worlds has proved that hard work pays off.”

Ten students from the team travelled to compete at Worlds, where the team participated in the qualification rounds on April 26 and 27, followed by the final round on Saturday afternoon. In each competition, the team’s robot is required to pick up two game pieces—hatch panels and cargo—from their stations. The robot then places the objects in either the cargo ship or the rockets to score points. All teams in competitions create alliances with two other teams competing where they work together in order to perform the necessary tasks. At the beginning of the year, the team prototypes the robot they compete with at the qualifying matches. This Build Season starts in early January and continues through the team’s qualifying matches.

“It is a toss-up when going into a qualifying match because you have no clue who your alliance partners are going to be and how good they are at performing tasks in the competition,” senior Brendan Cormier said. “Overall though, we usually do pretty well in qualifying matches.”

Prior to the World Championships, the Revolution competed in the New England District Championships at Worcester Polytechnic Institute from April 11-13, where they ultimately made it to the semifinal round, which followed the preliminary and quarterfinal rounds.

“Coming into this year, we had a very young team, with 12 upperclassmen and 23 underclassmen, so the team had to be strategic in what parts of the challenge we could accomplish well and realize what we could not reasonably pull off,” coach Brian Gaffey said. “We’ve learned a lot and are ready to take those lessons and apply them in our off season and going forward to future competition seasons.”

Because the Revolution has competed in numerous events throughout the year—such as the New England District Competitions at Bridgewater High School and at Bryant University—they accumulated enough points to qualify for the esteemed World Championship. Earlier this season, the team won the Quality Award sponsored by Motorola Solutions Foundation in the second week of competitions. This recognition is awarded by judges to teams with robots that display strength in concept and fabrication during their competitions.

“I am proud of how consistent and well our robot has been able to perform at all our competitions en route to qualifying for Worlds,” junior Rohit Josyula said. “Being part of a group of highly achieving individuals this season and going to Worlds to represent our team for my first time is something I will never forget.”