Baseball Defeats Braintree Early On In The Season 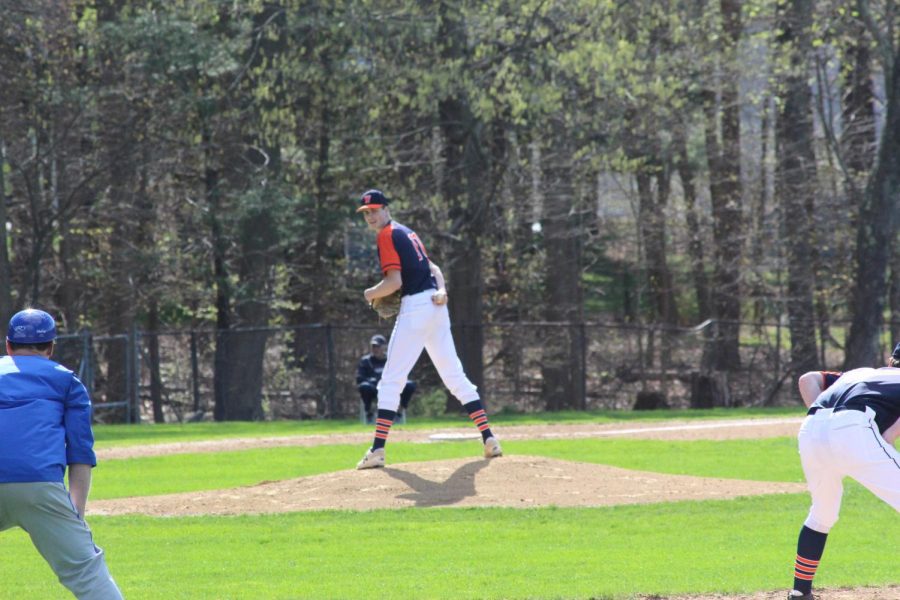 Walpole Rebels Baseball defeated the Braintree Wamps 5-4 in their first matchup of the season on April 24. Starting pitcher for the Rebels was senior captain and Northeastern University commit Cam Schlittler, who went all seven innings to earn the victory. The win improved Walpole’s record to 5-2 this season.

“The game was very highintensity, as both teams came out hungry and competitive right from the first pitch. Braintree was very loud, but every time they got something, we came right back at them to gain all the momentum,” Schlittler said. “I think that was the most important part, being able to hit in every situation we needed to.”

To start the game, the Wamps barely escaped the first inning after the Rebels were walked to load the bases. The Rebels had no problem getting on base, but they left two runners stranded at the end of the second inning. With the game tied 0-0, junior Jack Magane got the Rebels going with a double that was followed up by a single from junior Chris McLean. Both runners scored the first two runs after a ground ball out to first and a sacrifice fly out. The Rebels led the Wamps, 2-0, at the end of the third inning.

“We knew it was going to be a tough game and that we needed runners on base early. I got a pitch outside and was able to put it in right field that gave us what we needed to open up the game,” Magane said.

With two outs on the board at the top of the fourth, the Wamps hit a tworun single that would tie the game 2-2. A new pitcher for the Wamps entered the game in the bottom of the fourth, only to be dominated by the Rebels’ batters. Junior Jackson Walonis touched home for a third run that was followed up by McLean’s second hit of the day, bringing in a fourth run for the Rebels. The fourth inning came to an end with the Rebels up, 4-2.

“I was seeing the ball really well and knew what was on the line. We know that we always have to execute against that good Braintree team,” McLean said.

The Wamps searched for answers in their bullpen for the second time of the day to finish the fifth inning. The Rebels left another runner on base, unable to bring in a man from third. At the bottom of the sixth, the Rebels were walked home to give them a fifth run but left the bases loaded yet again.

“I think we obviously left a lot of guys in scoring positions on base, but we were able to get enough guys in to get the job done,” senior Aidan Murray said. “That is really just part of the game, and we look to execute more in these situations so we do not strand as many guys going forward.”

The seventh and final inning began as Schlittler remained in the game. With one more out needed to finish the game, the Wamps singled, and another hit to the outfield brought in a run. With the Rebels up 5-3, the Wamps had the game tying run at bat with a man on base. The man on base for the Wamps found his way to home to bring the deficit to one run. The Rebels got the third and final out to earn the victory, winning 5-4.

“It was a very key win for us, and we hope to continue playing competitive baseball,” Schlittler said.