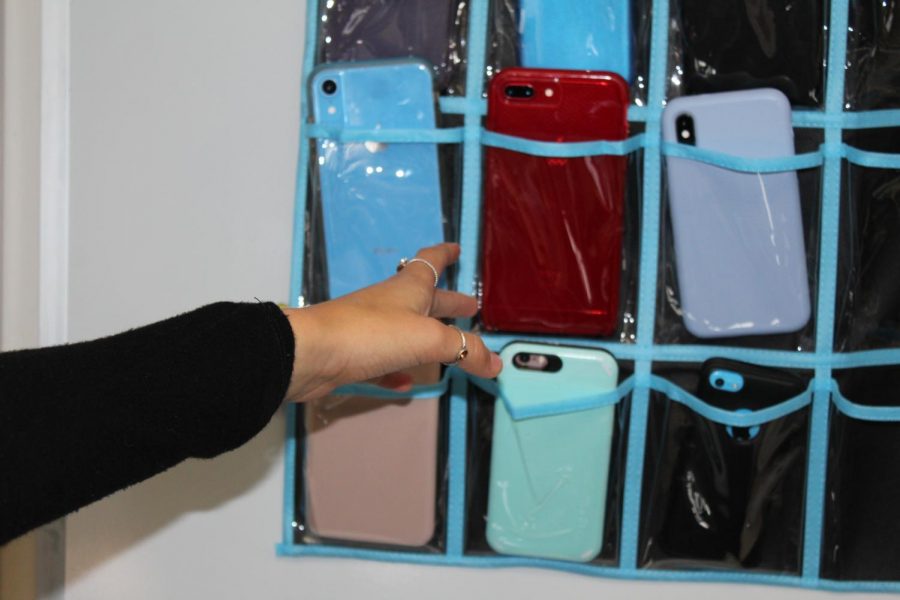 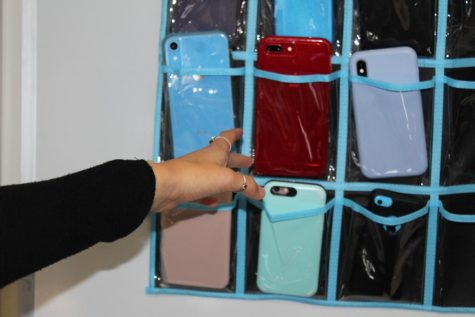 Phone holders used in every class

In efforts to increase the focus of students, Walpole High School Principal Stephen Imbusch distributed cell phone holders to every classroom, making it necessary for each student to put their phone away before the start of every class. In the past, some teachers have used cell phone holders, but it is now required for all teachers to enforce this rule. Imbusch instituted this schoolwide policy to provide consistency between classes to ensure that the rule is enforced. Because cell phones can be a distraction for students, many feel that this new rule allows students to focus on schoolwork.

“When a student goes from one class to another, and one teachers collects phones, and the other teacher does not, it sends a mixed message; it is kind of important but not important to everyone, so we, the students, have a choice whether it is important or not,” Imbusch said.

According to research conducted by Smart Social—an organization devoted to digital citizenship and social media safety—in 2018, 57% of teens agree that social media distracts them when they should be focusing on homework; therefore, teachers will try to combat this distraction by taking away their access to social media during class. In the 2018-2019 school year, Imbusch disabled student’s WiFi for their cell phones, and the physical removal of phones is another measure put in place to allow students to focus on school work.

“I’ve looked at the research and it is pretty compelling that having a cell phone with you does distract you from what you are doing, even if you are a really diligent kid who does not have a lot of distraction generally going on,” Imbusch said.

Despite the advantages of taking away phones to increase productivity, many students feel that this new policy is inconvenient, as there are multiple classrooms in the school that do not have functioning clocks, and before this policy, cell phones were a primary resource for students to tell time.

“I honestly don’t mind putting my phone away, because I do find myself reaching for my phone, but at the end of class when everybody has to leave and everyone rushes to the cell phone holder, it is such a hassle,” junior Liz Hinton said.

“Also, I don’t like how most of the clocks in the school do not work, and I never know what time it is.”

“Let’s see how it goes in classrooms, and if the student body is able to maintain this no cell phone in the classrooms, then maybe, I think that is a fair question to ask,” Imbusch said. 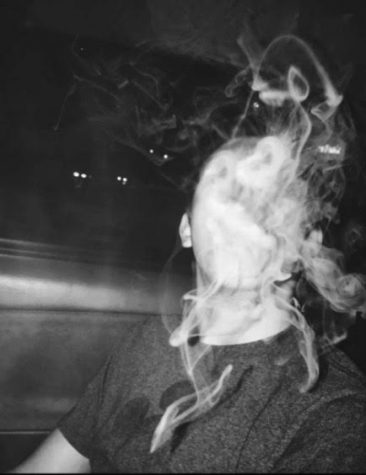 In addition to the new cell phone policy, Imbusch has also worked with WHS’s school nurse, Rachel Jackson, to help students stop vaping. Jackson is certified in providing classes in a program called Project Connect, which is a nicotine cessation program created by Caron, an addiction treatment company.

“A personal plan for success is ultimately what it is,” Imbusch said.

At the beginning of the year assembly, Imbusch emphasized that students should not worry about parents, sports, or punitive consequences because there will be no consequences if a student openly asks for help, and parents will not be notified unless the student is in immediate danger.

“Within four days I had seen 15 kids; kids from all different social groups, some in tears begging ‘I need help, I can’t stop, I don’t want to do this,’” Jackson said.

Project Connect is a program with an interactive workbooks with various techniques to help students quit. In addition to Project Connect, WHS is also pairing with Mass General Hospital for a vaping cessation program focused around marijuana and nicotine use through e-cigarettes.

“We really need 10 to 15 years worth of data to be able to have a successful research, so what Mass General is doing is offering cessation and compensation for it—money—varying on how successful you are as well as other factors,” Jackson said. Imbusch has also ordered students to be a part of the Project Connect program if they have been caught vaping in the past, but his goal is to use this program as a resource for students who want help.

Imbusch also plans on cutting down on the number of students who frequently walk the halls as a way of getting out of class. He has enforced the use of hall passes for all teachers and students, and has created color coded passes for each wing of the school. Hall passes have always been suggested, but they are now enforced whenever a student leaves class.

“I have seen a significant drop of kids out in the hallway,” Imbusch said. “Kids are not learning when they are walking around the halls.”