Teenagers Must Be Given the Opportunity To Drive Responsibly 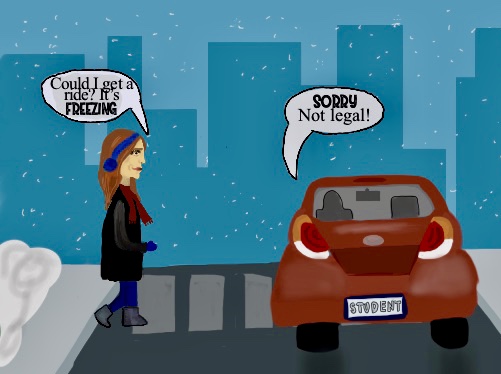 Even in desperate measures, students risk breaking the law when driving members outside of their family for six months after receiving their license.

If a teenager is to pass their road test, they should be sure to not make plans too quickly. Yes, driving out with friends seems like just another part of the new freedom, but it’s necessary to wait until they are at least 17 years old.

In Massachusetts, there are a series of strict laws that all licensed drivers under the age of 18 must follow. One law is that someone with a Junior Operator License (JOL) is not allowed to drive non-family members until six months after they pass their road test.

“You may not operate a motor vehicle within the first six months after receiving your JOL while any person under age 18 is in the vehicle (other than you or an immediate family member), unless you are accompanied by a person who is at least 21 years old, has at least one year of driving experience, holds a valid driver’s license from Massachusetts or another state and is occupying a seat beside you,” the MA Registry of Motor Vehicles Driver’s Manual stated. Basically, driving anyone who is not in direct family is illegal.

According to RhinoCarHire.com, Massachusetts is one of 14 states that restricts a full license until 18 years old. It is also one of eight states that waits until the age of 16 to give the option for a learner’s permit. There are 42 states that set up adolescents to drive before they reach the age of 16, which ultimately is more beneficial, as experience is gained from a younger age.

Waiting six months is unnecessary, as people are required to complete at least 30 classroom hours, at least 12 hours with an instructor, six hours of observation, and more than 40 hours of driving with a parent. And that is all made possible by the permit, which can be obtained only after passing an online test at the RMV.

Despite the law helping to accustom new drivers on their own and allowing them to develop a new understanding of driving, the law is one that is frequently broken by many people with a JOL. It is understandable that there are far less legal matters to deal with in the event of an accident, as the driver is still considered a child and the parents or guardians are liable. However, six months is a period of time that is far too long. Shortening the number of months required to wait can provide just as much experience.

For example, if one needs a ride home from soccer practice, they might simply reach out to a friend and ask for a ride. If the friend is driving themself home, despite passing their road test five months and three weeks ago, they still cannot give that person a ride.

According to the New Hampshire Department of Safety Division of Motor Vehicles, a licensed person under the age of eighteen, “Shall not operate a motor vehicle with more than one passenger less than 25 years of age who is not a member of the driver’s family unless accompanied by a licensed, responsible adult who is at least 25 years of age during the first six months holding the license.” This law makes more sense, as there is always someone that is going to need a ride home from school or a ride to practice.

In conclusion, Massachusetts should reconsider the structure of the JOL laws and consider re-evaluating them, as there are laws all across the nation that make more sense in regards to passengers allowed in a vehicle.