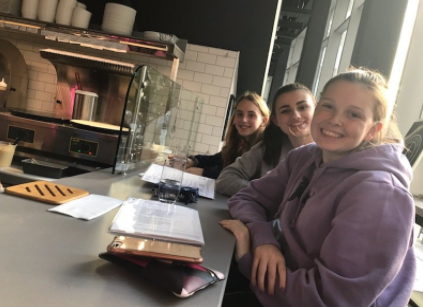 On Oct. 29, the Walpole High School French Club travelled to Paris Creperie restaurant in Boston where they enjoyed sweet and savory crepes over light conversation. Every year, the club travels to museums and restaurants in Boston to gain greater exposure to the French culture. Annually, the club travels to the Museum of Fine Arts in Boston and the Aquitaine restaurant in Dedham. This is not the first time the club has traveled out of Walpole to enjoy French sweets. Last year, the club visited the French Press Bakery in Needham.

“We thought it was really fun because the food was really good and it was fun to talk about French food and restaurants with Madame Frattasio along the way,” sophomore Jona Kurtiqi said.

The goal of the French Club is to engage students in the main aspects of French culture like art, music, film and cuisine. On their annual trip to the Museum of Fine Arts, club members roam the museum and view the hundreds of art pieces made by French artists. On their trips to the Aquitaine in Dedham, they enjoy French dishes like butternut squash bisque, mesclun salade and many others. Students of all language studies may join the club, all that is required is a desire to learn more about the French culture.

Students’ understanding of the French culture seems to increase through the club’s various trips.

“I tried a dessert that I’ve never had before, and it was interesting to see the different types of things you can put on crepes I’ve never thought to put on them. I feel that I have a better grasp of French cuisine now,” Kurtiqi said.

Over 275 million people around the world speak French, including native and non-native speakers. French is also the official language of 29 countries. The ability to speak French may be a useful tool for the club members.

The Paris Creperie is a bistro-style restaurant in Brookline that serves a variety of French breakfast treats. On the trip, students snacked on crepes and smoothies while facing the view of Harvard Street. The restaurant itself may have been on the smaller side for members, but some enjoyed that it reflected the small size of most restaurants in France.

For the rest of the school year, the club will visit the Aquitaine in Dedham on Nov. 6 and and the Museum of Fine Arts in the spring. As for the Paris Creperie, they hope to visit it in the years to come.