Instagram, Snapchat and Other Platforms Put Pressure On Teens To Have Perfect Bodies 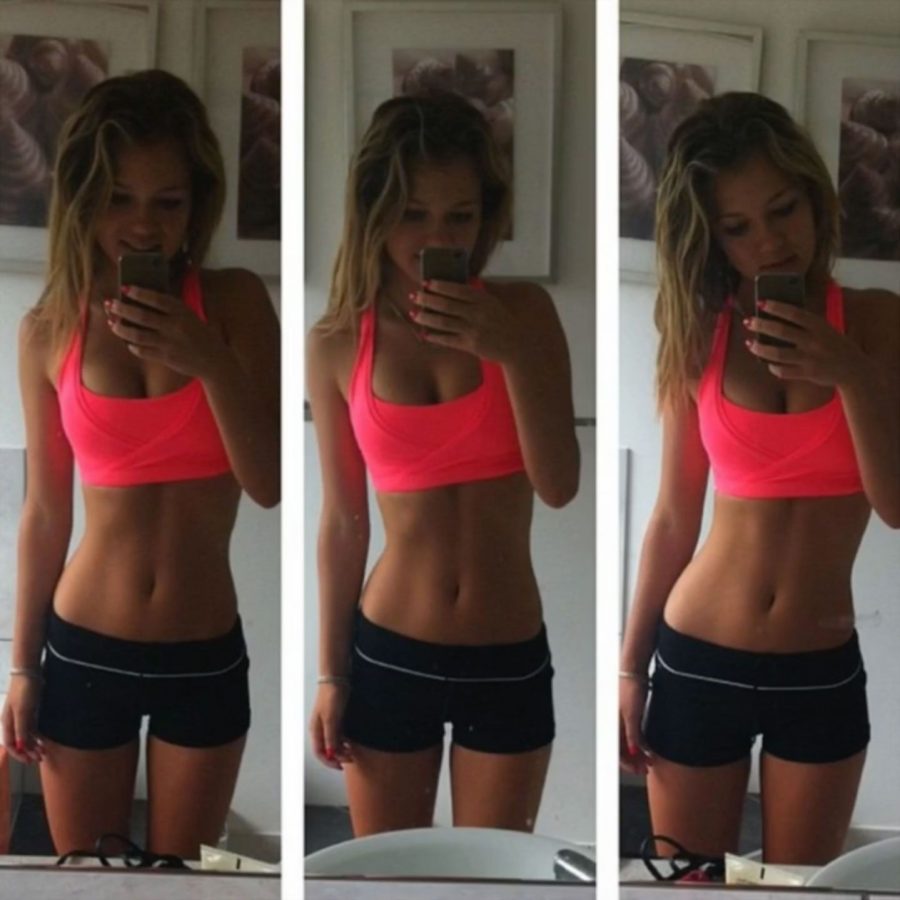 O’Neill encourages teenage girls to have a positive body image.

Growing up in the 2000s, teenagers are immersed into an era of evolving technology where competition for the best body image arises through social media. According to a survey by the Royal Society of Public Health, a charity in Great Britain dedicated to improving public health, Instagram was rated the most negative app, with Snapchat as a close second. The use of social media is proven to result in negative body image for young girls, which is becoming a major problem in society today. No matter how many people understand that their idols edit and retake photos, along with starving themselves for the perfect picture, teenage girls still look up to them as if what they are seeing is real.

To see how Instagram affects Walpole High School, The Rebellion conducted a survey questioning 55 students about how social media has personally affected their body image. Seventy-eight percent of respondents were female while the other twenty-two percent were male, coming from grades nine to 12. Fifty-two percent of females surveyed and sixty-three percent of males surveyed claimed Instagram to be their top app used to promote themselves to others.

Essena O’Neill, named one of the most influential people on the Internet by Time Magazine, came to a realization that she was a part of this problem for young girls. She admits to having starved herself for days before a photoshoot, in order to capture the perfect picture to post on her profile. O’Neill warns other girls that her so called perfect lifestyle is not what it seems.

“I’m the girl that had it all and I want to tell you that having it all on social media means absolutely nothing to your real life,” O’Neill said.

Girls began to compete with O’Neill and other popular girls on social media because they envied their lifestyle. Social media has added this layer of competition to today’s generation that would not have existed otherwise. Over half of the females surveyed admitted to editing their pictures whether that was whitening teeth, clearing skin, or even changing the image of their body. Some girls will go as far as only editing themselves, to putting themselves in the spotlight as the center of attention in group pictures.

“Girls want to look like the models they see on Instagram and if they don’t, then they tend to feel bad about their bodies and who they are as a person. They will do anything and everything they can to obtain that body they see as perfect,” Rebecca, a student at WHS, said.

Girls today spend so much time worrying about their appearance along with the amount of likes and comments on their feed that it takes away from the moment they are living in. Over half the females surveyed at WHS claim that the more comments and likes they receive, the better they feel about themselves, which causes social media to be relied on as a way of boosting some girls’ self esteem.

Students comparing themselves with celebrities and more popular students has begun to foster jealousy and inadequacy. Teenagers have begun to post what they think will get the most likes, not what they think portrays their true self. Social media is now seen as a place to display the best you, not necessarily the real you.

Many girls now often feel the need to change their eating habits to compete with the images they see online. Girls began to think that if they are not like models on social media, then they will not be seen as attractive.

“Today, it seems like everybody sees models and thinks that is the way they have to look or else they aren’t pretty,” Erin, a student from WHS, said.

In The Rebellion’s survey, data was also collected regarding eating habits throughout the school and it came to the attention of The Rebellion that thirty-seven percent of girls at this school have felt embarrassed buying, bringing or eating lunch in front of others.

“If I am eating a lot, I get self conscious,” an anonymous female at WHS said.

Many girls agree with that statement. Some girls admitted that they fear being seen as gross and disgusting by eating publicly. Fifty percent of girls have tried going on diets to lose weight and sixty-one percent have felt guilty after eating. Clearly, social media plays a large role in this problem by fostering this competition and creating the need for the ideal body image.

“I think everyone has compared themselves to others at some point whether that be a model or just another girl on their feed. It just affects everyone differently,” Emma, a student at WHS, said.

Many girls today do not see Instagram as the dangerous app it truly is. It has created this competition between girls, larger than simply who has the most likes or comments. It has set the idea of what the perfect body is, which is something almost impossible to reach, as most of the posts are edited with Photoshop. Girls should be less worried about not having the perfect body and instead embrace the body they have.

Wendy Thornton, WHS’s social worker who works on enhancing social functioning and her students well being, explained how she felt as she scrolled through social media. When coming across a celebrities post, Thornton, just like many other girls, are aware of the editing that goes on behind the scenes.

“There are times when people say I wish I had that [body] even though they know it’s not real,” Thornton said.

Clearly, Thornton speaks for the majority, as ninety percent of girls surveyed from WHS have felt jealous and wanted to be like their role model. All in all, social media platforms can negatively impact a teenager’s mindset.

“You put others down to make yourself better, but in reality I’m thinking that you’re spending so much time worrying about your appearance that it takes away from the picture that you’re taking or the moment that you’re in,” Thornton said.

*Emma, Rebecca, Erin are made up names to protect the anonymity of the sources.