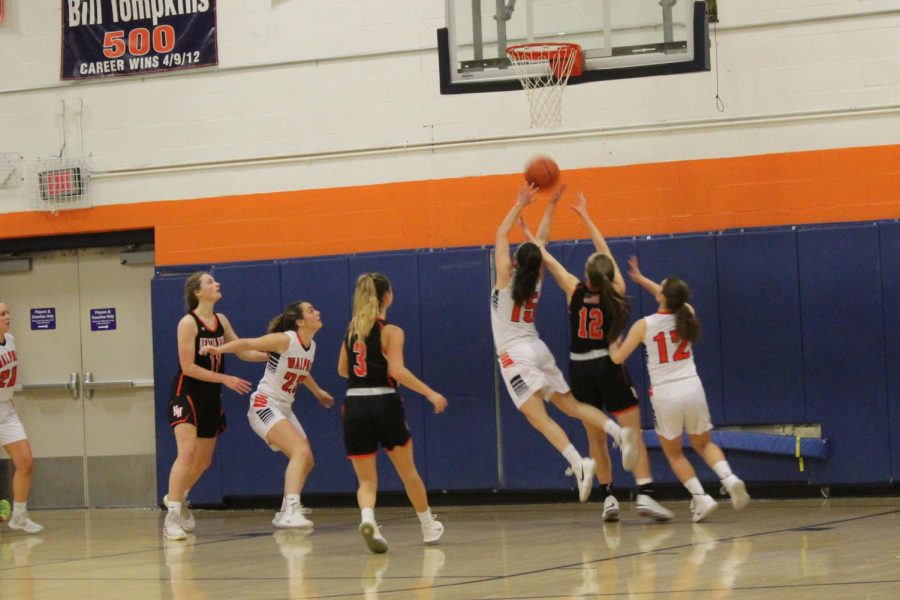 Girls Varsity Basketball fell to Newton North 55-50 for their first regular season game on Friday, Dec. 13 at Walpole High School. The girls were met with tough competition, as the score mostly fluctuated throughout the game.

“For the first game of the season, I think we played pretty well and everyone contributed” junior Shannon Jordan said. “It was sad that we lost, but we have more time to keep working.”

As it is a tradition to hold tryouts for winter sports the week after Thanksgiving, the preseason was shortened due to the late holiday and a snow day that pushed back tryouts. However, the girls quickly adapted to their team.

“I’m proud that I remembered the plays under pressure since it was such a short preseason,” freshman Catie Hurley said.

The Rebels had seven points on Newton North before the Tigers nearly caught up. The first quarter finished with Walpole only two points in the lead at 10-8. But within the second quarter, Newton North picked up their playing skills. However, senior captain Sydney Scales matched Newton North’s competition by scoring a total of 19 points during the course of the game.

“Myself and my teammates kept driving to the hoop and getting looks,” Scales said. “Unfortunately, the shots just didn’t fall for us.”

Unable to recover coming out on bottom at the end of the third quarter, the Rebels ultimately lost by five points.

“We have a lot of potential and a few new people to fill important roles. Although it wasn’t the outcome we wanted, we worked hard and stayed composed throughout the entire game,” senior Paige Brooks said. “We have a great group of girls on and off the court, and I am really excited to see how we’ll do this season.”