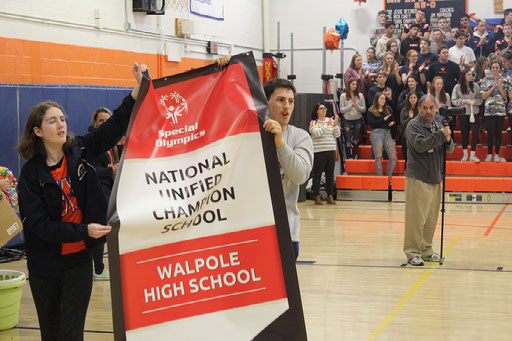 At the Walpole High School pep rally on Nov. 25, students and faculty in the stands cheered on representatives from the Best Buddies and Unified Sports teams who received a Unified Champion Award from the Special Olympics. This is a national award recognizing schools with successful inclusive sports programs.

To be considered, a school must meet standards showing their dedication to Unified Sports, Youth Leadership, Advocacy and School Engagement. Generally, schools are recognized who have teams of athletes with and without disabilities, groups like Best Buddies for them to get involved as leaders, and an active community supporting inclusion in different events. The Unified Champion School program began in 2008 and runs on funding from the Office of Special Education Programs within the U.S. Department of Education.

Not only was WHS one of over 170 schools in the state recognized as a Unified Champion School, but it was also awarded the more prestigious National Banner School status, which only 25 other high schools in Massachusetts have achieved. To receive the banner, schools must go above and beyond the expectations to demonstrate a commitment to inclusion, meeting ten specific standards within the three categories, including sports, as well as demonstrating sustainability of their programs for the future.

“The program is designed to be woven into the fabric of the school, enhancing current efforts and providing rich opportunities that lead to meaningful change in creating a socially inclusive school that supports and engages all learners,” the Special Olympics website stated.

Walpole was awarded specifically for its Unified Track and Field team, which is coached by school psychologist Charles Ferro and competes in the spring with both athletes and student partners. The MIAA league for high school sports as well as the Massachusetts Association of Student Councils works with the 376 schools and teams to sanction and volunteer at their Unified Sports meets. Schools seeking to create a Unified team can have athletes participate in either Unified Basketball, Bocce or Track and Field. Walpole has both Track and Bocce teams.

The Unified Track athletes are most all involved in the Best Buddies club as well, which is another aspect of the school’s pursuit of inclusion. The Best Buddies club gives students with special needs and other students a chance to socialize with each other outside of a school setting. WHS has also promoted inclusion through its events in the past; for example, the school’s involvement in the national pledge to end the “R-Word” and the “Rock Your Socks” day for Down Syndrome awareness. Walpole Student Council also participates in the MASC Polar Plunge, an annual dive into cold winter waters to support the local Special Olympics. These special events, along with year round teams and clubs, allow WHS to exceed expectations to become a Unified Champion School.

“The accomplishment is more than the recognition: the fact that we do all this stuff for this population of students is awesome. I think that they feel included, they feel like they’re part of the school; they walk down the hall and they’re welcomed. The recognition is great, because I think parents need to see that we do this; the whole staff needs to realize how in comparison to other schools what we do here is pretty special,” Ferro said.