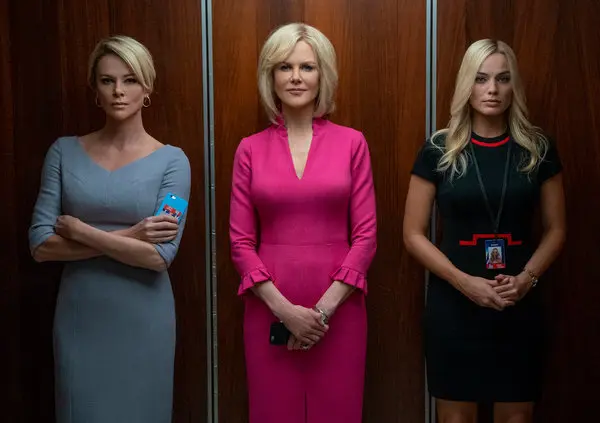 “Bombshell” delivers complex narration of the 2016 sexual assault allegations against Fox News CEO Roger Ailes and the women behind the lawsuits. Starring Nicole Kidman, Charleze Theron, Margot Robbie, Kate McKinnon and John Lithgo, “Bombshell” exposes the misogynistic establishment within Fox News and other workplaces. With stellar acting and brilliant casting, “Bombshell” is able to convey the complexities of the characters and create a dynamic and fascinating storyline.

Following Gretchen Carlson’s (Nicole Kidman) lawsuit against Roger Ailes for sexual assault, more than 20 women accused Ailes with graphic allegations depicting emotional and sexual abuse. Ailes was forced to resign weeks after the initial lawsuit, and perpetuated many immense financial settlements and lawsuits, as well as the resignation of anchor Bill O’Reilly and the network’s co-president Bill Shine. “Bombshell” stays true to the actual timeline and people involved, aside from the fictional character Kayla, portrayed by Margot Robbie.

Kayla was introduced as an evangelical millennial working her way up in the newsroom, who was exploited as a result of her professional ambition. Kayla’s character explores the relationship between religion, right leaning conservatives and the Me Too movement, demonstrating the truly destructive nature of any sexual assault in an emotional scene where Kayla allows herself to break down and question her true values after she had been assaulted.

Another notable characer is a closeted lesbian Fox reporter portrayed by Kate McKinnon. Feeling hopelessly trapped in her current job, McKinnon’s character touches upon LGBTQ discrimination within the workplace and the stigma surrounding LGBTQ people in general. In addition to having LGBTQ representation within the plotline, “Bombshell” supporting actor Brigette Lundy-Paine provides nonbinary representation in the media after they came out as nonbinary on Nov. 7 in an Instagram post. Creating a diverse cast and storyline is an important part of any media, and it is important to “Bombshell” specifically because it adds to the oppression experienced by minorities.

The impeccable acting within the film itself expanded upon the true feelings of anger, frustration and hopelessness felt by victims of sexual assault. Kidman’s character, Charlseon, the first woman to make an allegation, depicts the frustration felt be the first person to speak out, while also serving as a role model by exhibiting the massive change that is made possible by just one person speaking out. After anchorwoman Megyn Kelly (Theron) stands with Gretchen Charlson (Kidman) at the risk of damaging her career, the power of female solidarity shines, and is emphasized even by the animation behind the closing credits of women taking powerful roles in the professional life.

In addition to the incredible acting in the film, the casting of the actors themselves is remarkably accurate in creating near doppelgängers of their real life counterparts. By matching their character in real life, directors are able to include real media footage of the scandal unfolding to once again remind viewers of the reality behind this drama.

Despite failing to recognize other important women in the scandal such as Lauri Luhn who testifies to being psychologically tortured by Ailes and potentially missing out on more compassionate scenes, the film is a remarkable exposee on sexual abuse in the workplace and the emotional damage following abuse and msyogany.