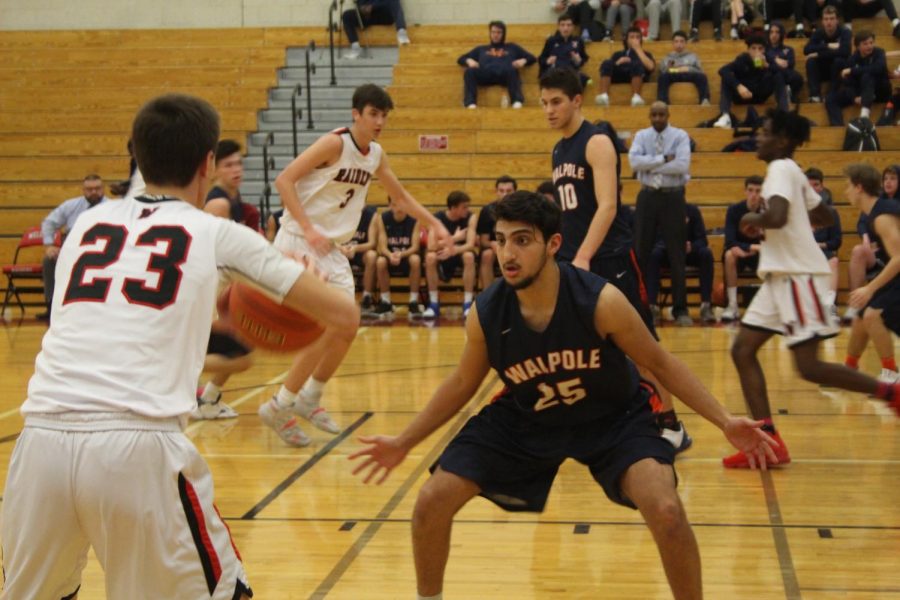 The Walpole boys basketball team fell to the Wellesley Raiders 65-35 on Friday, Jan. 3 at Wellesley’s home court. Walpole, looking to add another win to their record, put up a strong fight throughout the game, but Wellesley’s overall skill was unmatched.

The Rebels have had a slow start to the year with only one win against the Medfield Warriors. This year, the Rebels are led by coach Oliver Vil, a first year head varsity basketball coach, so the young roster is slowly adjusting to the new coaching staff and style. Also, with only three returning varsity players, they are still learning how to work with one another.

“We have just been working as hard as we can and buying into our system, obviously with a massive personal change. We are also seeing new guys step up,” junior captain Jack Connell said.

The game started with a 15-0 run by the Wellesley Raiders, but despite Walpole’s slow start, they kept the intensity up throughout the first half. They finished the half trailing by only 10 points.

“I think the team came out really slow as we allowed Wellesley to start off with a 15-0 run, but we were able to come back going into halftime with still a close game due to the team’s great intensity on both ends of the court,” sophomore TJ Farrell said.

Wellesley pulled away in the second half, and dominated the Rebels, finishing the third quarter with a 25 point lead over Walpole with a score of 47-22.

“The second half is when we did not come out as ready as we hoped, and we slowly let the game slip away from us as Wellesley dominated the second half of the game,” junior Charles Nicholas said.

Walpole was unable to recover during the fourth quarter and ultimately fell to the Wellesley Raiders by 30 points with a final score of 65-35.

Despite the loss, both Farrell and Nicholas played well for the Rebels. Farrell scored 11 points and was highly praised by his teammates. In addition to Farrell, Nicholas had a couple three point shots throughout the night to help Walpole’s effort.

The team looks to improve offensively and defensively throughout the remainder of their season. Offensively, they look to reduce the number of turnovers they commit each game, and on the defensive end, they need to focus on communicating with one another and forcing the other team to make tough shots. With these improvements, the team hopes to make tournament.

“My hope for the future is that we make tournament and win the majority of our games the rest of the season,” Nicholas said.