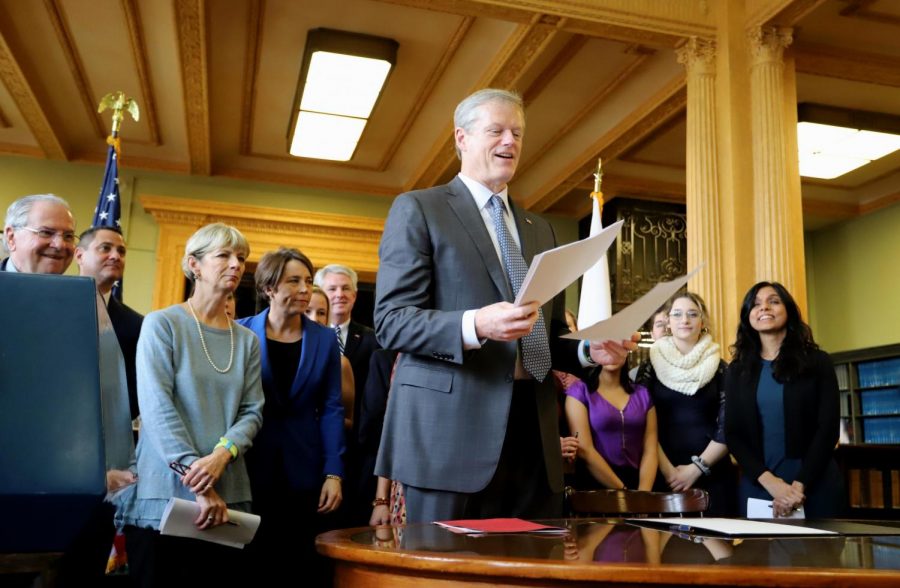 Massachusetts’ new law on vapes and e-cigarettes went into effect on Nov. 27. The fall’s temporary ban attempts to restrict access to vaping devices by banning flavored vapes and limiting the sale of other tobacco products.

Back in September, Governor Charlie Baker announced a public health emergency due to the recent vaping epidemic. He passed a controversial ban on the sale of all vape products scheduled to last three months.

This three month total ban expired in December, but on Nov. 27, Baker signed a bill with the Public Health Council to specifically keep flavored tobacco products illegal permanently. Although many products have returned to shelves, flavored pods and vape liquids, as well as menthol cigarettes and flavored chewing tobacco are not available. This limits access to the products put in vapes more than the devices themselves. Massachusetts is the only state to ban these products, making it the strictest state in vaping regulation.

This Act Modernizing Tobacco Control went into effect immediately for vaping products, but flavored cigarettes and chewing tobacco will not be phased out until June. Although stores cannot sell flavored products, users may still buy them at “smoking bars”: licensed establishments for smoking.

As for unflavored vape products, those with less than 35 milligrams of nicotine per millimeter will be returned to circulation; otherwise, only licensed tobacco outlets can sell products like JUUL pods to individuals over 21, rather than 18. The pods of liquid for the popular JUUL devices fall into this category, so the unflavored varieties are still inaccessible to teenagers under 21. Stores have to keep nicotine products behind counters and with posted signs warning of the risks.

Baker was motivated to change the law largely because of the risk vapes pose to young people. Teenagers are more prone to choose the flavored liquids and become addicted to the nicotine masked in a sweet taste, and vape companies such as JUUL have been accused of marketing specifically to underage people for revenue. By removing the enticing flavors and establishing a 75% excise tax, the goal is to reduce the number of teens vaping.

Baker cited widespread concerns about the unknown side effects of vaping, such as lung diseases. Three people have died of vaping-related causes, a part of the 47 recorded deaths nationwide reported by the CDC, with over 2000 falling sick.

“With the number of young people using e-cigarettes spiking, it is not only critical that there is research into nicotine addiction treatments for this population, but it is imperative that we continue efforts to prevent youth from ever using nicotine,” American Medical Association President, Dr. Patrice Harris, said in a recent statement.

Many business owners oppose the law—complaining of its short notice, warning of black market sales and questioning why these same actions are not being taken against flavored alcohol. Despite protests including two lawsuits for lost sales, the new law will continue indefinitely, and businesses found violating it will be fined or otherwise punished.

“The bill goes a long way toward restricting access to the most addictive kinds of nicotine products. Longer term, the bill will keep kids and teenagers from getting their hands on vaping products, especially flavored products,” Baker said.

Marijuana based vapes and cartridges, including medical marijuana products, are not impacted, but they were also temporarily banned in November by the Cannabis Control Commission and remain so indefinitely to allow for more research.

“The legislature created a series of restrictions around access to vaping products, especially for kids, and gave the Department of Public Health some pretty broad latitude to regulate the product and make sure people understand the risks going forward,” Baker said.