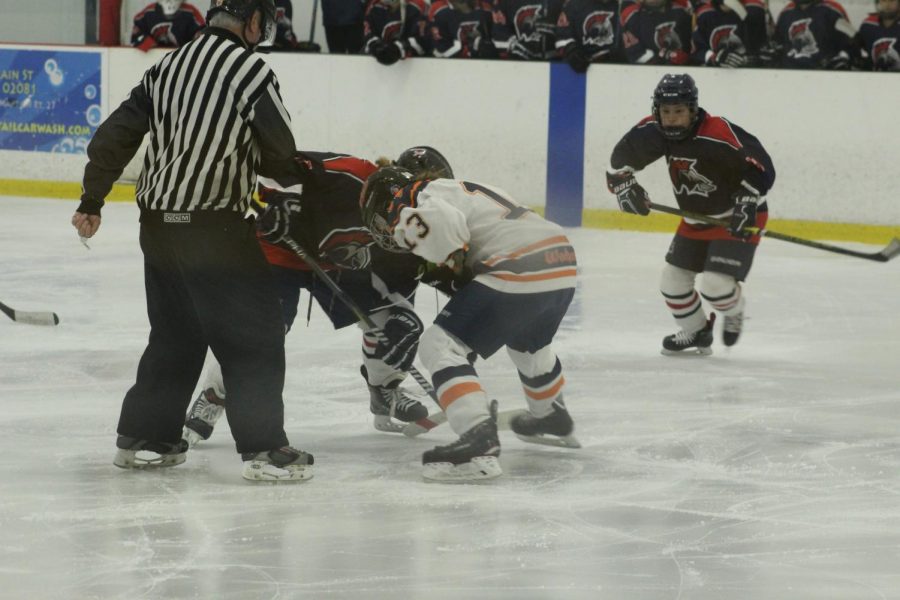 The girls’ varsity hockey team defeated the Brookline Warriors 4-2 at Rodman Arena on Wednesday, Jan. 15. The Lady Rebels improved their record to 4-5 and are looking to claim a spot in the upcoming playoffs. They played a hard fought game, but ultimately were able to come out with the win.

“Going into the game we knew we needed to play well and with a lot of aggression in order to win, especially coming off of a tough loss to KP, we knew we had to play better than we did before,” senior captain Catie Martin said.

Within the first minute of the game, the Rebels were able to put the first number on the board with a goal from junior Emily Desimone. However, the Warriors quickly responded with a goal on the other end tying the game up 1-1 until the end of the second period.

“We tried to just simplify our game a little bit and stop thinking too much. We were really just focused on winning the puck battles and maintaining good position in both zones,” Martin said.

In the third period, the Lady Rebels buckled down and took the lead with goals from junior Kerrin MacMillan and freshman Lucy Verderber. They kept the puck in the offensive zone for the remainder of the game, with a last minute goal from Desimone to clench their 4-2 victory over Brookline.

“We played as a team against Brookline. We had a lot of good breakouts and strong passes,” senior Sophia Pacella said.

The Lady Rebels have been working hard at practice to focus on their technique as they are looking for a spot in the tournament. They defeated the Milton Wildcats on Saturday, Jan. 18; however, they fell to the Needham Rockets on Wednesday, Jan. 22 at Babson Skating Center. Their record is now 5-6.

“We have some work to do if we want to make the postseason, but it is very possible. Our goal every year has been to make tournament and that has not changed this year. We just need to win the games we are favored to win and keep playing hard,” Martin said.