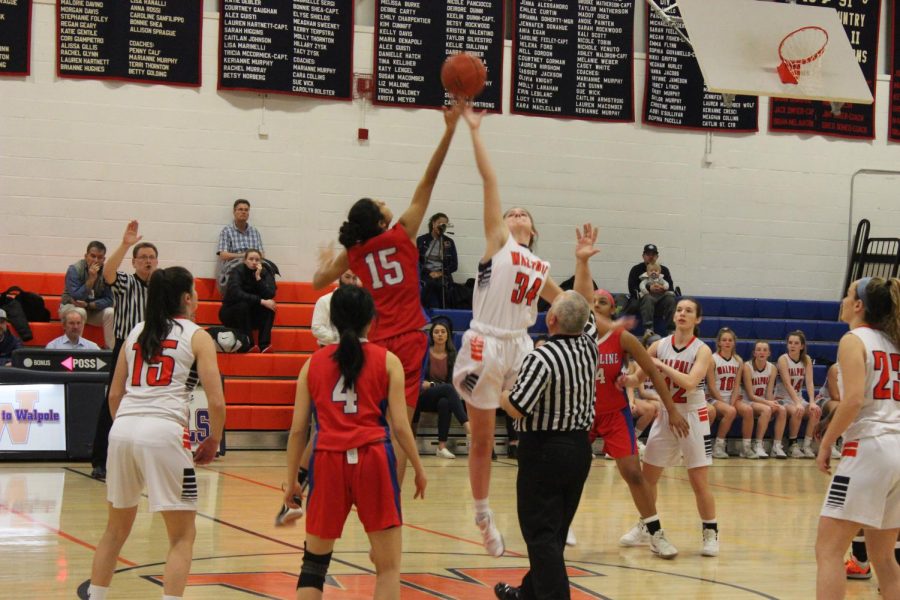 Girls’ basketball defeated the Brookline Warriors 62-25 at home on Jan. 14. Their record is now 9-4.

“Tonight was a good team win. Offensively, I think we did a good job fast breaking and using our speed to our advantage and our defense throughout the game was great,” senior captain Elisabeth Roche said. “That being said, I think our passing could have been better, as we had many passes deflected.”

The Rebels gave up just four points during the first quarter. Their strong defense continued, and they went down to the locker rooms at the half leading 30-12. Many players also made key baskets that allowed the Rebels to extend their lead.

“After any player hits some important shots, the game starts to change,” senior Paige Brooks said. “We all become motivated to keep scoring and to create a bigger lead against our opponent.”

The offensive play continued throughout the second half and the Rebels scored 16 points in each of the remaining quarters, while only giving up 13 to the Warriors during the entire second half.

“In the beginning of the season there definitely was a divide between the seniors and underclassmen,” Roche said. “However, we have become much closer as a team through playing together on the court and hanging out outside of basketball, and I’m sure it will continue as the season continues.”

The Rebels only lost one starter from last year, and the remaining four—sophomore Natalie Griffin and senior captains Ainsley Dundon, Sydney Scales and Roche—have maintained their chemistry. Even further, they have extended that chemistry with first time varsity players, including the fifth starter, freshman Catie Hurley.

“I’m still learning a lot about how [the other starters] play together,” Hurley said. “They help me so much though because it’s so easy to ask them questions.”

In terms of postseason hopes, the Rebels only need to win one more game to qualify for playoffs because of their 9-4 season record.

“To get into tournament is our first goal,” head coach Dave Wall said. “Our second goal, as always, is to compete for the league. We can’t do the second without getting the first, so we’re focused on getting one more. Then we will kind of reset and try to put ourselves in a position to compete for a league title.”

Within the Herget, the Rebels’ record is 5-3. The team has a couple big games following the Brookline win in the Herget like Needham on Jan. 21 and Natick on Feb. 2. The Rebels fell to Needham 54-46. Their next game is Friday against Framingham.

“Every player on our team plays an important role. Whether it’s on the bench or the court, everyone is supportive of each other, which makes the game more exciting and gives the players on the court the confidence to drive to the net or take shots,” Brooks said. “In addition, all three captains are great leaders and role models for the underclassmen.”