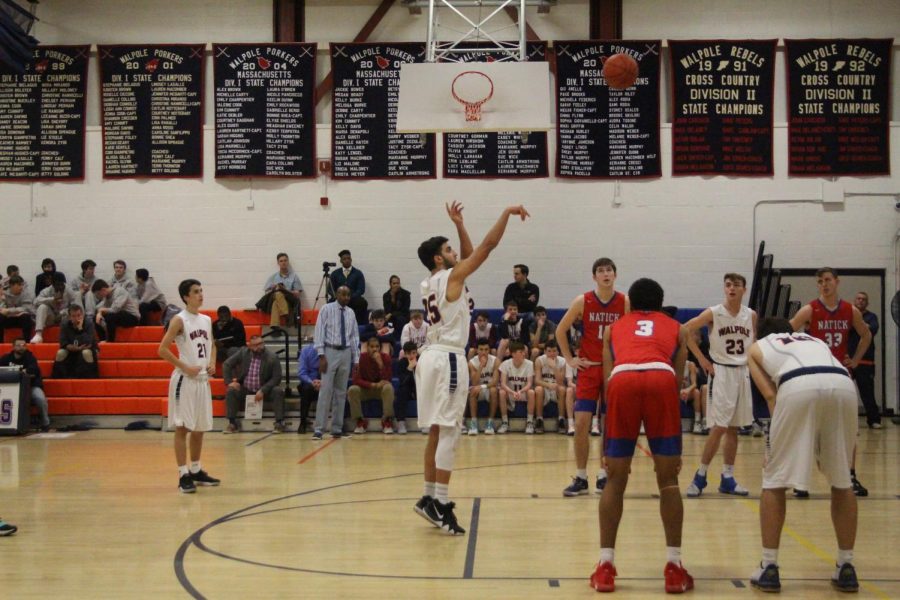 On Feb. 4, the boys’ basketball team fell to Natick at their home court 71-44. After a one point win against Framingham on Feb. 2, the boys hoped to keep up the momentum and pick up their third win. Walpole fought hard, but Natick’s strong offense was a tough match up. Junior captain Jack Connell sat out due to sickness.

“I think the team played with great effort and energy, and we just did not focus on the details,” Connell said.

Starting off the game, Natick scored the first 10 points of the game, causing Walpole to call a timeout with five minutes left in the first quarter. They hoped to make some changes and come back out strong. However, they were only able to bring the score to 23-7, with Natick leading by the end of the quarter.

In the second quarter, they were called for many defensive and offensive fouls, giving Natick many opportunities to score off of free throws and turnovers. This advantage gave Natick a 44-18 lead going into halftime. At this point they were aware of their mistakes and what they needed to do to improve in the future.

“Something we definitely need to work on is our defense and communication with each other,” junior Haidar Faraj said.

In the second half, the boys had good momentum going into the fourth quarter outscoring Natick 16-9; however, they still ended with a tough 71-44 loss against Natick.

“We played hard throughout the entire game even when our shots weren’t falling in the first half,” junior Brian Malone said. “We started to get more comfortable in the second half, but it was too late.”

Learning from this game, they hope to improve defensively in order to prevent their opponents from gaining leads early on. Despite this loss, the team still stays positive for the remainder of their season, their main focus is making tournament and finishing their season strong.