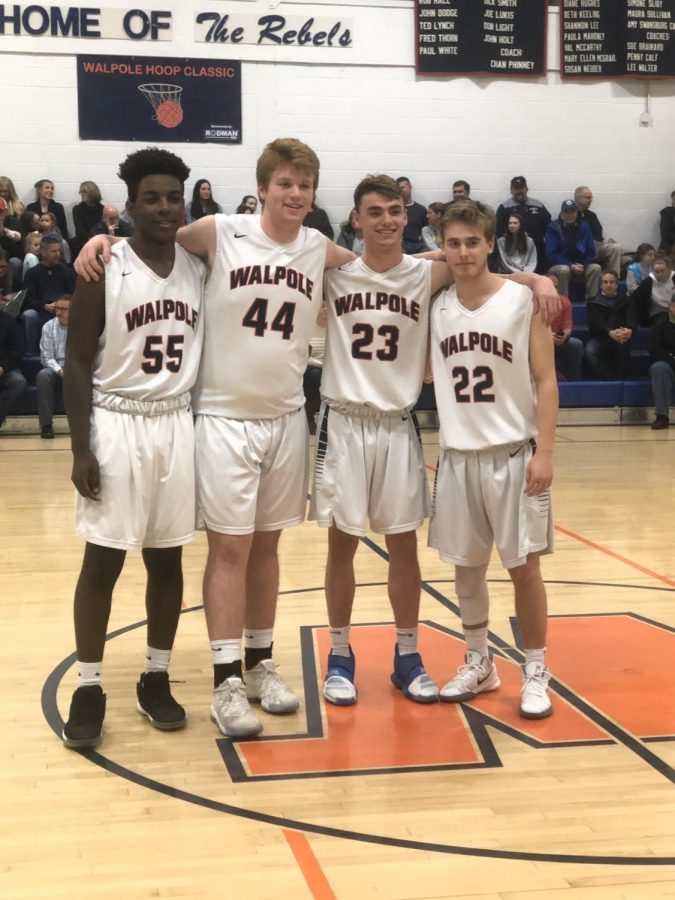 Walpole boys’ varsity basketball lost to Bishop Feehan on their senior night, Feb. 6. The Rebels put up a strong fight throughout the first half, but they slowly fell to the Shamrocks during the third quarter finishing the game.

“I think we played a very complete game and executed what we wanted to; however, we obviously did not get the results we wanted to because they are a tough team, and they went on a run we could not recover from,” junior captain Jack Connell said.

The team and spectators recognized the four seniors prior to the game, as they played their last home game of their high school basketball careers. Drew von Klock, Niall Gallagher, Jack Magane and Brian Valcourt posed for pictures with their families and handed their mothers a bouquet of flowers.

“The seniors on our team are very meaningful and bring leadership and toughness both on and off the court,” Connell said.

“We played well throughout the first half and scored several crucial baskets to help keep the momentum and the energy up. Several players made great plays on the offensive and defensive end,” freshman Sean O’Brien said.

“We fought back in the fourth for the seniors, as this was their send off and we did not want to let them down,” Connell said.

The Rebels were able to cut the Shamrock’s lead to eight points with about two minutes left to play in the game, but they ultimately fell short. The Rebels finished their season with a loss to Sharon and Archbishop Williams and a win against Ashland.