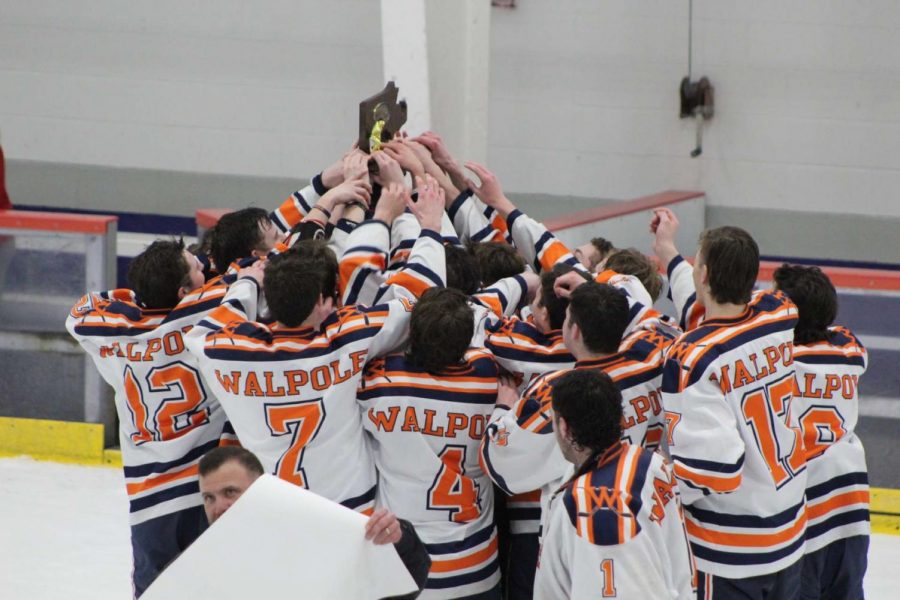 On March 8, the Walpole boys’ hockey team beat Archbishop Williams at the Gallo Ice Arena in Bourne by a tight score of 1-0 in the Division 1 South Sectional Finals. The Rebels came out strong in the postseason as the 12th seed. They faced fifth seed Braintree, fourth seed Duxbury and ninth seed Falmouth to get to this point, and they were hoping to continue that momentum.

“Heading into the game, we had a lot of nerves,” sophomore Declan Hunter said. “For almost every player, this was the biggest game we have ever played, but getting on the ice and hearing the huge crowd cheering for us helped our team tremendously.”

“Scoring the first goal in the game is always a good sign for our team,” Fisher said. “Throughout the tournament, we have scored first in every game.”

Walpole’s junior goalie, Jack Curran, anchored a strong defense against the Bishops who had 25 shots throughout the game, 11 shots of which were in the third period. Still, Curran was able to shut out the Bishops with help from his teammates.

“I was very confident in my team’s ability to get out to a quick lead, and then me locking down that lead for the rest of the game with our defensive core who is playing better than any other in the state right now,” Curran said.

Although it was a large team effort leading to the win, many of the players give some credit to their large student section. Their fans travelled far to show their support and had a great impact on the energy and atmosphere in the rink.

“The amount of people that came out an hour away was incredible,” Fisher said. “They light that extra fire under us to make us remember that we aren’t just playing for our team, but for the town.”

Through this win, they earned the title of the South Division 1 champions.

“A lot of people doubt our team,” Hunter said. “I believe we proved to the state that we earned everything that we have accomplished this season.”

Following the game, the Rebels were supposed to advance to TD Garden for the Division 1 State Finals, to face the winners of the North Division, Belmont. Because of the coronavirus outbreaks, MIAA decided to cancel the game to prevent spreading of the virus. Although fighting for the title would have been more satisfactory, the boys’ co-champion title they share with Belmont is still a large achievement.

“It has been a crazy ride watching our story unfold and watching one of my biggest dreams come true,” junior Ethan McDonough said. “I couldn’t be more proud of the group of boys that I get to share it with.”