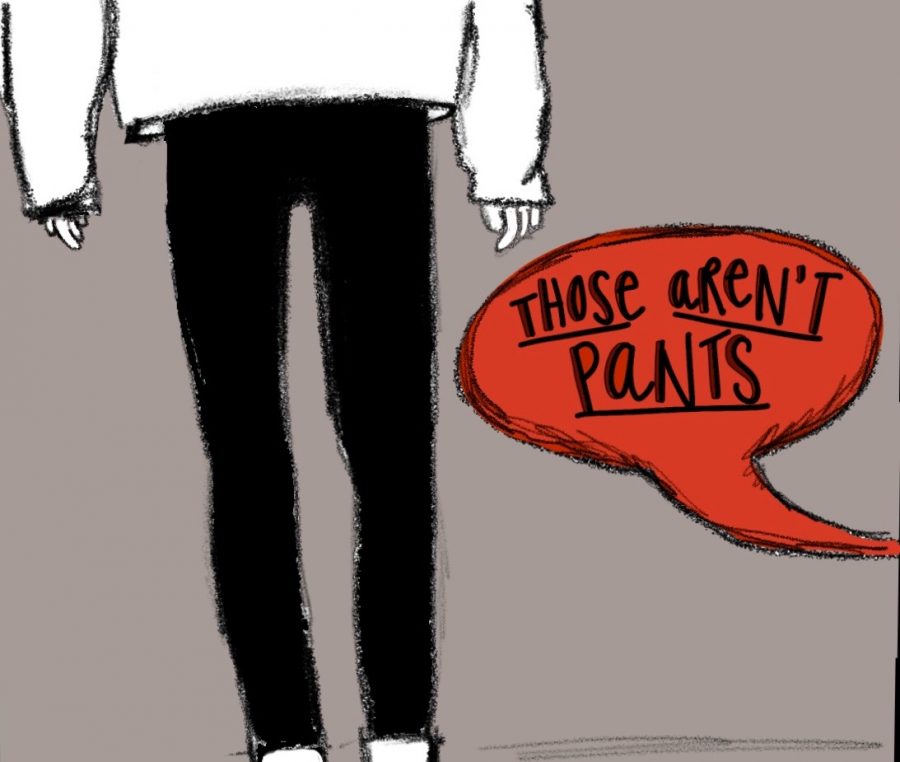 From whether FRIENDS or The Office is better, to the presidential candidates, there are many things that people debate about in 2020. One ongoing debate targets a specific group of people unfairly: women. Female clothing should stop being sexualized, starting with accepting that leggings are pants.

Most women wear leggings due to both the movable and comfortable fabric. Those that are bought from high quality companies are stretchy and not thin, with a trustable opacity. Many view leggings as an easy pick to wear to the gym or just to lounge in at a friend’s house. They can easily be dressed up or dressed down, and many companies offer a variety of colors and patterns. It is obvious as to why many people find themselves opting out of the jeans option, and putting on their favorite comfortable pair of black leggings.

Those that view leggings as an inappropriate choice of clothing make this claim in reference to their tight fitting style and the chances that they are see-through. However, if men can go running outside in the spring and summer months without a shirt on, then there should be nothing wrong with women wearing tight pants. Additionally, those who purchase leggings should ensure they are buying from a reliable source, decreasing the chances that the fabric is not thick enough and see-through.

In reality, however, there is a deeper, underlying issue to the leggings debate. No matter what a female is wearing, there will be judgement. This needs to stop.

All women should have the ability to decide what to wear and when to wear it, free of judgement and condescension of others. If a woman feels confident, anyone that discourages her clothing should be ashamed. No person has the right to make others unhappy. Women are frequently forced to confine themselves to the standards that society sets for their choices, while men can get away with wearing just about everything. Just because a woman is wearing something that shows off her figure, does not mean that it should be defaulted as inappropriate.

Primarily, many dress codes are aimed at females. According to The Pudding, 77% of high schools’ policies specifically prohibit the visibility of certain body parts. Longmont High School in Colorado features this excerpt in their dress code: “[Students may not wear] clothing that bares or exposes traditionally private parts of the body including, but not limited to, the stomach, the buttocks, back and breasts.” Teague High School in Texas states: “Shirts must cover the midriff and must cover the chest area (cleavage must be covered).” Clothes that may demonstrate cleavage or even tightness around certain parts would encourage teachers and administration to call the female out and make her feel bad for her choice in clothing. Rather than teaching others to not sexualize girls by the outfit choices, people—more often men—are being taught that it is okay to objectify women. This stems into larger issues later in life. If no one is telling men to stop dehumanizing women at a younger age, then when they mature and find themselves fitting into the workplace, they will be more likely to think that looking at females in a sexual way is okay. Additionally, many dress codes lack male clothing restrictions, so dress codes have been made into a way for administration to single people—mostly females—out.

Although Walpole High School does not have a strict dress code, many students still feel judged for their choice of clothing, but feel others are left unjudged because it flatters some people in a different way.

On the popular app TikTok, a recent trend is popping up on the For You Page. The For You Page (FYP) can be described as “a stream of popular videos that appear on one’s TikTok feed based on other videos that one has previously liked,” junior Kate McClellan said. The trend is for a female to post two videos doing the same dance. In one video, she wears a more revealing outfit, such as a cropped shirt and leggings, and in the other video, she wears baggy clothing, like a loose sweatshirt and sweatpants. The caption of the video will say something along the lines of “Doing a social experiment… like whichever video you see first!” In most cases, the video with the more revealing outfit has the most likes and pops up on the FYP more often. This demonstrates to society that showing off one’s body is a way to gain attention, and that clothing can determine peoples’ opinions. It also teaches young women that in order to have clout on TikTok or to be “given the hype,” they must show off their features because being themselves is not good enough.

Moving forward, society needs to worry less about what women are wearing, and worry more about who they are as a person. In 2020, there are many people dealing with mental illness, and to increase any female’s self consciousness by judging her sense in clothing is sickening. Considering leggings as pants should be the world’s first step to enjoying a judgement free society, allowing women to be accepted, regardless of their choice in clothing.