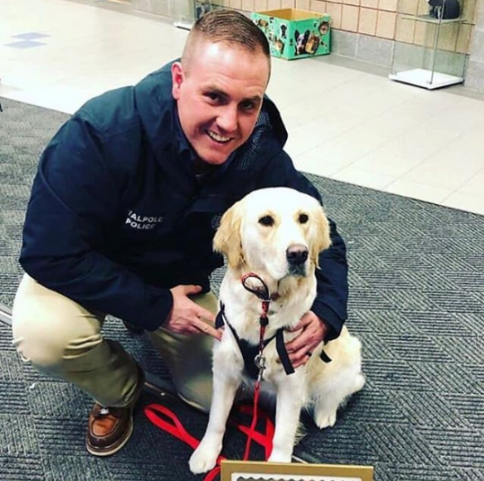 Walpole’s community resource dog, a beloved golden retriever named Rebel, was nominated for the National Therapy Dog through the American Humane Hero Dog Awards. Rebel frequently attends schools across Walpole to be a therapy dog for students before exams, helps young students with their reading by providing a calming presence, supports local sports and helps to bridge the gap between police officers and Walpole students. Rebel was born and raised through the Golden Opportunities for Independence (GOFI), a program devoted to breeding golden retriever dogs and training them to become service dogs. Rebel was adopted by School Resource Officer (SRO) Thomas Hart.

“The American Humane Hero Dog Awards is an annual, nationwide competition that searches out and recognizes America’s Hero Dogs–often ordinary dogs who do extraordinary things, whether it’s saving lives on the battlefield, lending sight or hearing to a human companion or simply providing the tail-wagging welcome a pet owner relishes at the end of a hard day,” the American Humane Hero Dog Awards website stated.

American Humane has been working since 1877 to ensure the safety, welfare and well-being of animals, and they host the annual Hero Dog Awards as a way of celebrating notable dogs across the country. The contest has seven categories including Therapy Dogs, which is the award Rebel is nominated for, and presents the winners at a nationally broadcasted awards ceremony. People can vote daily for the dog they are supporting up until May 7 on the American Humane Hero Dog Award website, and after three rounds of voting, the winners will be announced before the September awards ceremony in Los Angeles. Various celebrity judges are also included in the final decision making process. Past judges include Olympian Amy Purdy and Emmy Award winning actress Carolyn Hennesy.

“I feel that therapy dogs are great in their ability to reduce stress in students.  Rebel and the other therapy dogs that visit the school provide a relaxing presence in the building where students can sit in the lobby, pet the dogs and are hopefully a little less stressed,” WHS social worker Wendy Thornton said.

“Rebel has helped in more ways than I can count. She has helped students get over anxiety and get to class, she has helped to de-escalate students in a fight, she helped a student get to the hospital after a medical emergency, she has helped struggling readers to work harder in class and achieve their reading goals, but most importantly, she has brought the town of Walpole together,” Hart said.

Officer Hart began working as a School Resource Officer in 2017, and he adopted Rebel in the fall of 2017. Since then, Hart and Rebel have become a pair recognizable by almost all members of the Walpole community. Hart graduated from WHS in 2003, and before taking his position as SRO in 2017, has worked in the special education department of multiple Walpole schools. WHS nurse Rachel Jackson is Rebel’s co-parent, and she takes care of Rebel at night outside of school.

“I think she just makes you happy. When someone sees her, they just smile and their whole mood changes. She has brought the whole community together. No matter your age or social background, Rebel is a neutral figure who brings people together,” Jackson said.

Officer Hart started an Instagram account in 2018, and now has a following of over 1,000 people, many of which being Walpole students. The Instagram features pictures of Rebel in the community with students or officers and helps to foster a sense of community spirit. Other various Walpole social media accounts have shown support for Rebel. From elementary school teachers to high school guidance counselors, Rebel has had an outpouring of support.

“I am excited for Rebel and hopefully she wins, but there are a lot of amazing dogs up for the award so we will have to wait and see,” Hart said.