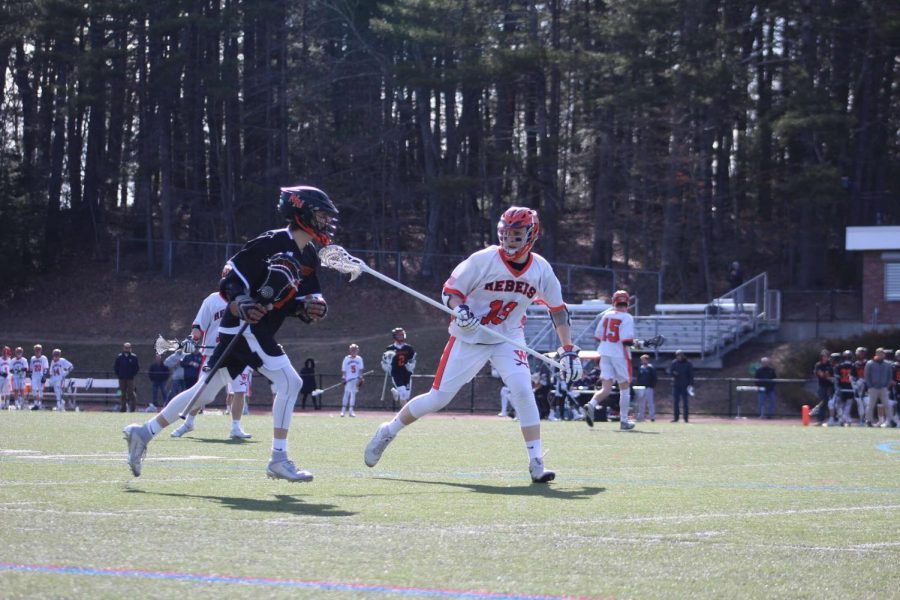 Marc Hirshom will be trading in his Walpole lacrosse jersey for a Plymouth State University jersey next year. Hirshom committed to play defense for the Panthers on Jan. 27.

Hirshom has been playing on the varsity Walpole boys’ lacrosse team since his sophomore year. During his first year on the team, they ended the regular season with a record of 14-4 and advanced to two rounds of playoffs, winning their first game against North Attleborough and ultimately losing to Westwood.

“My biggest accomplishment in my lacrosse career was making a very good varsity team my sophomore year and getting a year to see the difference between varsity and freshman,” Hirshom said.

As a member of the varsity team, Hirshom made an impact on everyone around him. Not only is he a solid player, he is also a great leader on and off the field.

“Playing sports with Hirshom my whole life has been great. He’s always been a good, competitive player in anything he does. He’s a great leader and stays level headed when others maybe would crack under pressure,” senior Liam Fisher said. “Co-captaining a state championship winning hockey team was a great experience to do together, and he is definitely someone you want on your team.”

Hirshom began playing lacrosse with the Walpole Youth Program during elementary school, as well as playing for the Primetime Penguins, a club team based out of Boston; however, Hirshom gained his love for the sport by watching his older brother Kyle play.

“My brother Kyle has been a major influence for me as a lacrosse player,” Hirshom said. “Kyle is two years older than me, so I would always go to his games to see him play and try to model my play style after him.”

During their high school careers, Marc and Kyle played on the same team for one year during the 2018 season, while Kyle was a senior and Marc was a sophomore. Watching his brother play made Hirshom want to work harder and continue to improve his game, especially when Kyle committed to Saint Michael’s College, where he now plays. Following Kyle’s decision, Marc was even more determined to continue playing and reach the college level.

“I didn’t always want to play in college. I made my decision that I wanted to after my sophomore year season with the high school. That season made me love lacrosse more than I ever had before, and after that, I began putting in a lot more work so that I could continue playing in college,” Hirshom said.

Hirshom had been talking to the Plymouth State coach for a few months prior to his decision, but from the minute he visited the campus, he knew it was where he was meant to be.

“I decided on Plymouth State over other schools because of the atmosphere up there. When I went for my visit and overnight stay, I realized how right the school was for me,” Hirshom said. “I knew right after meeting with the coach and a few of the players that this was where I was going to end up.”

Shortly after his commitment to Plymouth, the coronavirus struck the United States and forced MIAA to make the decision to cancel all future sporting events for the remainder of the winter season and the entirety of the spring. As well as lacrosse, Hirshom is also the captain of the hockey team, and this year, they had made it to the Division I State Finals at TD Garden. The game was inevitably cancelled for safety reasons shortly followed by the announcement that all spring sports would be cancelled for the 2020 season.

However, Hirshom has not let this stop him; in fact, it has motivated him even more for the upcoming season at Plymouth State University.

“I’m very excited to join a new program and continue playing the sport I love. Especially with this season being cancelled, I can’t wait to start playing next year for the Panthers,” Hirshom said.