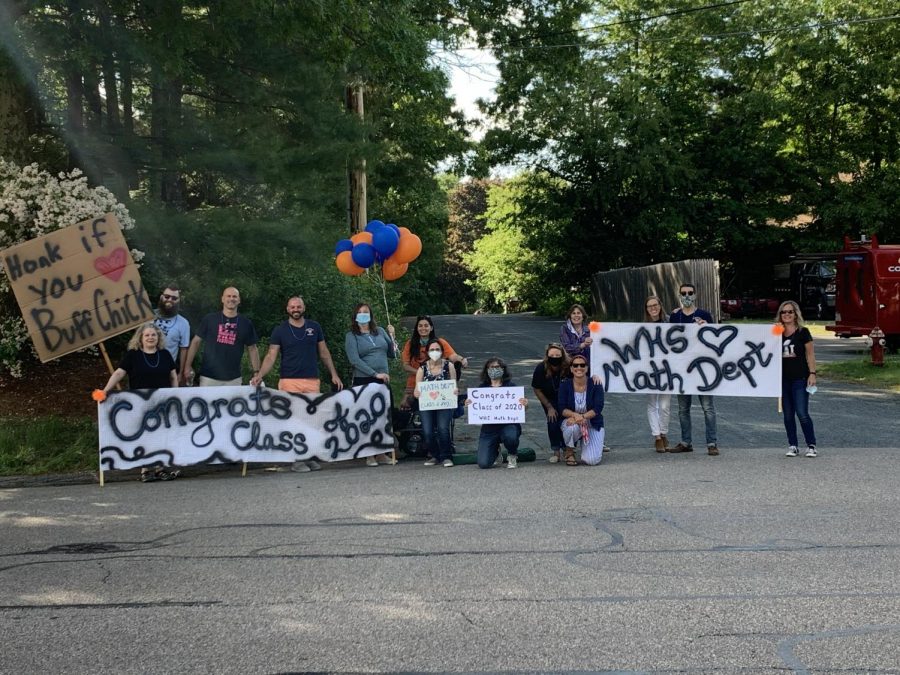 Due to the current pandemic, a normal graduation complete with students packed tightly together while awaiting their turn to walk across a stage and shake hands with administration members is not possible—neither is packing the bleachers with parents, loved ones and students. While senior year has been altered dramatically for the Class of 2020, Walpole honored the graduating class with a live streamed, staggered graduation and a parade.

Students were assigned times throughout the day to line up at the highschool where the cars would travel behind the school and around to finally reach the tennis courts, where a small stage was set up for receiving the diploma. Teachers, administration and police officers lined the route to congratulate students, hand out yearbooks and provide instruction for the event.

“I wanted the students to have the experience of walking over the stage. I think we managed to honor every student, while also allowing the family and neighbors to be part of the experience. The parade was a phenomenal experience that gave the whole community the chance to celebrate the seniors,” WHS principal Stephen Imbush said.

Peter O’Farrell, WHS television production teacher, broadcasted the event on public cable along with the help of other television students. O’Farrell and the television production team have filmed the graduation in the past, but this year they had to be innovative and work to ensure that seniors were honored despite the atypical graduation. Three standup cameras and one wireless camera were set up in the WHS parking lot to film the event. An edited version of the ceremony including speeches from five seniors and the presentation of a class gift was posted on Walpole Media YouTube page on June 8.

“The broadcast did take hours; however, I felt as though it was my way to help these seniors have some normalcy. By having a live stream and an edited version of the ceremony, this will allow everyone to see their friends and classmates graduate. This graduation will certainly never be forgotten and I’m glad I got to be behind the scenes for it,” sophomore and television production student Morgan Navick said.

Along the back of the school, parents, friends and loved ones helped celebrate the occasion with banners, posters, streamers and balloons commemorating seniors. Many of the banners included a picture of the student along with the school they are planning on attending in the fall. Teams such as the Girls Tennis Team hung up their jerseys to congratulate seniors, and some clubs such as WHS Dance Company created homemade posters that honored the graduating class.

“It was really sweet seeing that the jerseys were hung up because even if we didn’t have the season this year, we’re all really grateful for the seasons that we did have and the team is always the main reason why we had so much fun,” senior tennis captain Emily Duseau said.

The 8.6 mile parade route, starting and ending at WHS took students up Main Street, across Mylod Street, down Washington Street and finally back to WHS via Common Street with hundreds of people cheering them on. Families flocked to the center of town, Mylod Field and lined up on Washington Street to support the graduating class. Many teachers also made an appearance along the route, while the WHS Math Department created their own sign to commemorate the seniors.

“The seniors missed out on a lot of special events this spring, and while the parade doesn’t quite make up for everything they missed, it was a truly unique way to celebrate the Class of 2020 that I hope they will remember for a long time. It was a lot of fun to be able to celebrate the seniors in person and not on a computer screen. We appreciated the opportunity to let the seniors know that we are all rooting for them,” WHS math teacher Sheryl Lerner said.