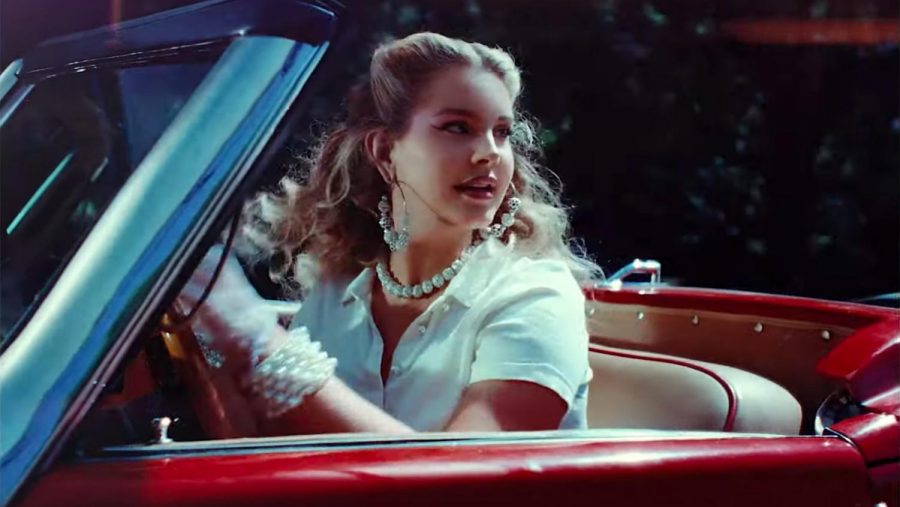 Known for her dramatic and romantic music, artist Lana Del Rey did not disappoint fans when releasing her seventh studio album “Chemtrails over the Country Club” on March 19, 2021. Del Rey released two songs prior to the whole album which kept fans excited and on their toes: “Let Me Love You Like A Woman” and “Chemtrails Over The Country Club.” “Let Me Love You Like A Woman” was released first on Oct. 16, 2020 as a lead single for the album. The second song, “Chemtrails Over The Country Club” was released Jan. 10, 2021 with a music video accompanying it on Jan. 11.

Del Rey’s album consists of 11 songs, with two most popular being “White Dress” and “Chemtrails Over The Country Club.” The music video for “White Dress” was released Mar. 19, featuring hypnotizing, vintage-style shots of Del Rey rollerblading through a country town. With soft, melancholic vocals, Del Rey reflects on simpler times and longs for her past life when she was not famous. The song is bittersweet as Del Rey describes a beautiful and simple scene which she has lost and is unable to return to.

“Chemtrails Over The Country Club,” released prior to the album, was released along with a music video as well. The song does justice to the album, as it sets up the nostalgic and dramatic vibe that the rest of the songs follow. Much like the rest of the album, Del Rey relies mainly on her vocals throughout the song. The instrumentals are hushed and delicate, giving her vocals a chance to tell the story and capture listeners. The video starts off once again with retro shots of Del Rey, living glamorously in the past. Towards the middle, however, the video takes a violent and powerful turn showing quick flashes of other characters and supernatural activity; contrasting from the beautiful atmosphere she creates in the beginning.

Although Del Rey successfully pleases fans in “Chemtrails Over The Country Club,” many judged her for being predictable and failing to expand in the music industry. Previous albums of hers follow the same sad love story and share the same vocals as she usually displays. Fans, however, remain loyal to Del Rey and find that she is perfecting her style and that this album has shown that she is only getting better with time.

“Chemtrails Over The Country Club” also received backlash for its cover, which displays Del Rey gathered around a table with ten other women, all smiling cheerfully. Yet, many felt Del Rey failed to represent a variety of races, as most of the women appear to be white in the photo. Del Rey attempted to defend herself against these comments on her Instagram.

“In 11 years working I have always been extremely inclusive without even trying to. My best friends are rappers and my boyfriends have been rappers. My dearest friends have been from all over the place, so before you make comments again about a WOC/POC issue, I’m not the one storming the capital, I’m literally changing the world by putting my life and thoughts and love out there on the table 24 seven. Respect it,” Del Rey said, responding to comments when releasing the album cover photo.

Unsurprisingly, listeners were not pleased with this response. Many commented back, accusing Del Rey of assuming that all rappers are POC, a harmful stereotype, and digging herself deeper into a hole. People commented that having friends who were POC can not excuse Del Rey for this racism, and that this response only made the controversy worse. Although Del Rey has defended herself in interviews, she is still being held accountable by many listeners as well as die-hard fans.

Despite the controversy over Del Rey and her album cover, “Chemtrails Over The Country Club” kept loyal fans pleased and successfully carried Del Rey further in her style. It has proved to be popular and Del Rey has made no sign of stopping in producing music.