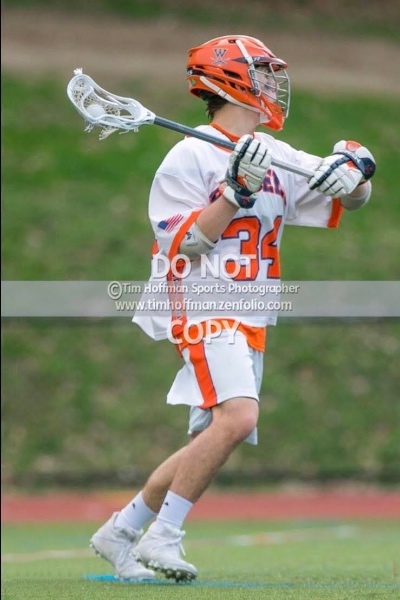 One of the many Walpole High School seniors committing to colleges to play lacrosse is Timothy Sullivan. Sullivan has been recruited as a Division III attackman at Curry College. Sullivan first picked up a stick as a child, practicing with his uncle and ever since then, dreamt of playing his whole life. Sullivan started playing lacrosse in first grade and ended up turning it into a year round commitment.

Finding the right school came easily to Sullivan because he instantly fell in love with Curry. Simply the opportunity to step on the field and hold a stick in his hands was enough to sway Sullivan’s decision.

“My cousin is a graduate from Curry College. After attending her graduation, I instantly knew Curry was the school for me and that I wanted to spend the next 4 years there,” Sullivan said.

Sullivan also was involved in wrestling and football at Walpole High School, but it became clear that his love for lacrosse would outrun his passion for other sports.

“I quit wrestling and football to work hard and accomplish my dream and I needed every second I could get to get there. I knew that lacrosse would put me in a better mindset and I would always love to play it,” Sullivan said.

Role models are great people to have around as one goes through sports ,and life in general. Sullivan noted that he was lucky enough to have role models who touched multiple aspects of his life.

“My prominent coaches that grew my love for the game were Mr. Cooney, my dad, Mr. Crowely in youth, and also my club team, Laxachusetts. My youth coaches [that] I mentioned have had a big impact on my life on and off the field and have helped me every step of the way,” Sullivan said.

Sullivan has goals to make a difference and be a part of a team where he can play his best. While being a part of the college and sports experience, he hopes to keep up his grades and not get stuck behind in classes.

Sullivan’s dedication to lacrosse has paid off and moved him from Walpole High School class of 2021 to Curry College class of 2025. Go Colonels!