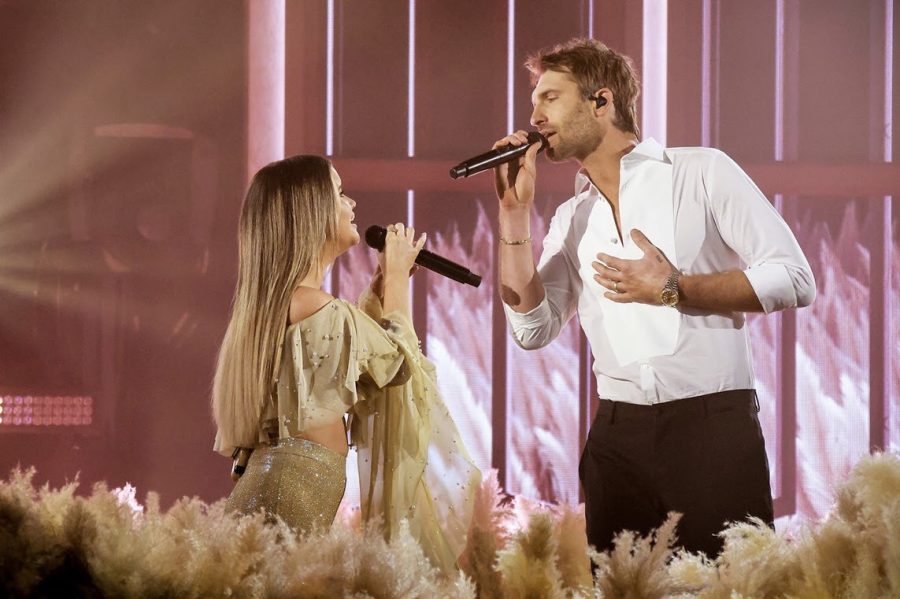 The 56th Annual Academy of Country Music (ACM) Awards took place on April 18 with a variety of performances at different places in Nashville, TN. There was a mix of live and pre-taped performances at the Grand Ole Opry House, the historic Ryman Auditorium and Bluebird Cafe. Usually the ACM Awards are held in Las Vegas at the MGM Grand Garden Arena, but due to COVID-19, the event was held in the heart of country music in Nashville, like they did last year. Keith Urban and Mickey Guyton co-hosted with Guyton making history as she was the first black woman to ever host the ACMs.

Maren Morris and Chris Stapleton led in nominations this year with six each. They both had hit songs this year: “The Bones” and “Starting Over.” Miranda Lambert had five nominations and Ashley McBride and Thomas Rhett were tied with four each. This was the first year that four Black artists were nominated for awards: Mickey Guyton, Kane Brown, Jimmie Allen and John Legend, as well as the first year that every nominated song for “Single of the Year” featured a woman. Morgan Wallen would have been nominated for several awards with his chart topping, double-album “Dangerous;” however, his eligibility was halted after a video exposing him using a racial slur.

Gabby Barrett won “New Female Artist” after releasing her album “Goldmine” last year with several hit songs like “I Hope” and “The Good Ones.” Jimmie Allen won “New Male Artist” and performed with Brad Paisley at the Bluebird Cafe. Maren Morris was the only two-time winner at the ACM’s once again winning “Female Artist of the Year” as well as winning “Song of the Year” with “The Bones.” Luke Bryan won “Entertainer of the Year,” but could not go up on stage to accept his award because he unfortunately tested positive for COVID-19 a few days before the show. Luckily, they projected him up on stage at the Grand Ole Opry House where he thanked his fans stating, “What an amazing honor. I love you guys.” Thomas Rhett took home “Male Artist of the Year” and Dan + Shay won “Best Duo of the Year.” The “Album of the Year” was awarded to Chris Stapleton’s “Starting Over” and the “Single of the Year” was awarded to “I Hope You’re Happy Now” by Carly Pierce and Lee Brice.

As for performances, Carrie Underwood sung a medley of hymns from her album “My Savior” and then brought in gospel legend, Cece Winans, for “The Old Rugged Cross.” At the Bluebird Cafe, Chris Stapleton, performed “Maggie’s Song,” which he wrote about saying goodbye to an old dog. Maren Morris performed her duet with her husband Ryan Hurd “Chasing After You.” Thomas Rhett performed one of his new songs “What’s Your Country Song” where he mentions 16 different popular country songs that have inspired him in his life. Dan + Shay sang “Glad You Exist”, another new chart-topping single released this year. Overall, the Academy of Country Music put on an entertaining night while simultaneously following COVID-19 safety protocols.