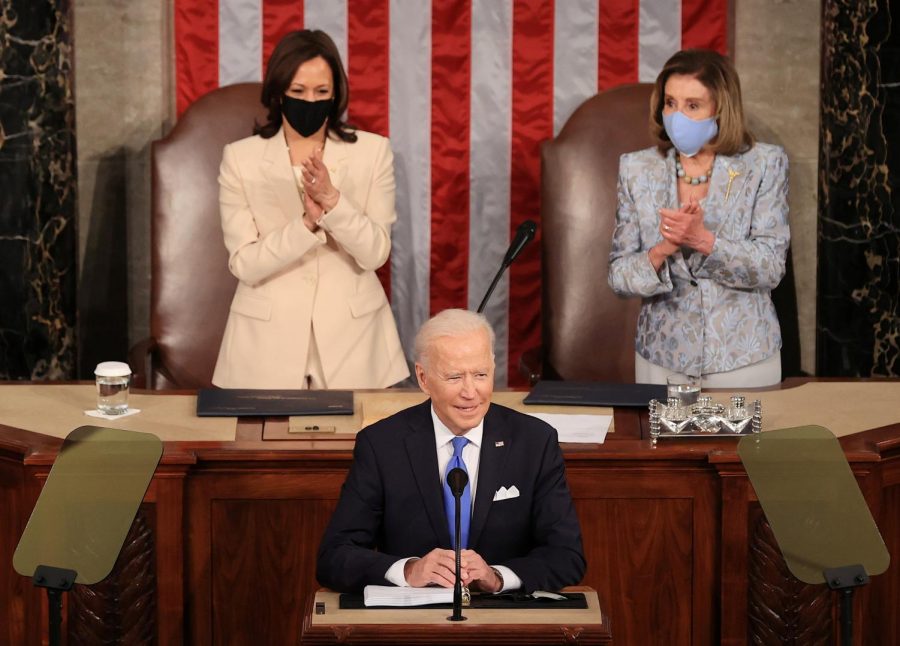 On April 28, President Biden delivered his first address to a joint session of Congress. Less than 200 officials were in the audience, compared to 1,600 during a normal year. This speech comes after Biden reached the milestone mark of 100 days in office.

Biden began his speech by instilling a sense of hope and optimism into the American people about the COVID-19 pandemic. He described the successes of the nation’s vaccine distribution, which has provided 220 million vaccines for Americans so far. He also highlighted his American Recovery Plan.

“After 100 days of rescue and renewal, America is ready for a takeoff, in my view,” Biden said. “We’re working again, dreaming again, discovering again and leading the world again. We have shown each other and the world that there’s no quit in America. None.”

Throughout his speech, Biden spoke on the importance of upholding democracy and setting an example for other nations. He explained his plans for a dramatic expansion of government services, including a $1.8 trillion plan for universal preschool, free community college, paid family and medical leave and federal funding of child care programs.

Following the conviction of Derek Chauvin, Biden used his speech to remind Americans that the fight against police brutality against African Americans is not yet over. He urged that Congress pass legislation to reform the police by the anniversary of George Floyd’s death on May 25.

Additionally, he called for reform for other human rights issues, including prescription drug pricing, gun control and modernizing the immigration system.

In order to fund these audacious plans, Biden called for a greater tax on America’s largest corporations and wealthiest citizens. He highlighted the fact that while 20 million Americans became unemployed throughout the pandemic, 650 billionaires have increased their wealth by $1 trillion.

“Trickle-down economics has never worked,” Biden said. “It’s time to grow the economy from the bottom up and the middle out.”

Following the speech, Republican Senator Tim Scott of South Carolina delivered the Republicans’ response. He claimed that Biden was just providing empty promises, rather than actual benefit for the American people.

“Our president seems like a good man, but our nation is starving for more than empty platitudes,” Scott said.

Despite this opposition, Biden looks into America’s future with optimism. In his first 100 days in office, Biden has passed a massive $1.9 trillion COVID-19 relief bill. Additionally, the US economic growth is expected to reach six percent by the end of the year, the greatest increase since 1984. Officials predict this growth will be enough to bring back 8.4 million of the jobs lost during the pandemic.

“I have never been more confident or more optimistic about America. We have stared into an abyss of insurrection and autocracy—of pandemic and pain—and ‘We the People’ did not flinch,” said Biden.