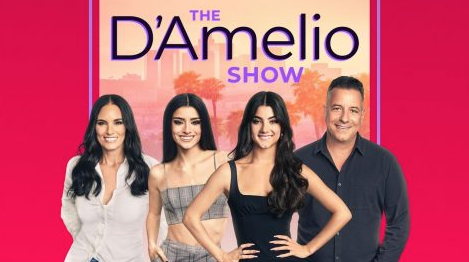 The D’Amelio Show was released on Hulu on Sept. 3 and the reactions on the show were shocking. The show gives the audience a glance at what life is like being an uprising social media star while trying to spend time with family and friends without working or even taking a day off to relax.

The viewers learn that content posted on social media does not show how these stars actually feel or act in real life. Because it is their job to keep their social media up to date and feel like they need to fit society’s standards as to what they should be doing, it is hard for people like Charli and Dixie D’Amelio to act like themselves while millions of people are constantly judging their every move.

When working in the entertainment industry, especially on platforms like Instagram or Tik Tok, it can be easy for the negative comments on their posts to overshadow the love and support they get from fans. The hate comments affect Charli and Dixie in different ways but both of the girls struggle with social anxiety and are constantly worried people are watching them in public, ready to criticize them after making a mistake.

Early on in the show, there is a scene where Dixie was crying while her parents Marc and Heidi D’Amelio tried to comfort her. Dixie claims “[The hate] makes me feel like I don’t deserve anything, I’m trying to do everything I can to better myself, and it just gets worse. They break up every single thing I do and make it a negative thing.” This part of the show gives the audience the inside perspective of working in social media and that it is not always positive.

Both Charli and Dixie’s lives are consumed by work whether it is working on music, posting videos, dancing, having interviews, creating clothing lines or filming for the documentary. People who follow the two girls on social media only see the good moments in their life but what is not seen is all of the work they have to put in behind the scenes. The show reveals the rare times that the D’Amelio family can take a break from work to unwind and relax.

“The D’Amelio Show” was able to capture how becoming popular so fast in the social media world can quickly uproot one’s life as you know it. When people see the family on social media, they only see the rewarding factor, that they are famous and have everything they could want, when in reality these influencers have to deal with anxiety and constant hate from strangers on the internet.

Overall, this show provides the details into the family’s private life that the public needed to see to show that social media careers are not always rewarding. If people are familiar with the family, this show would be a great recommendation because viewers learn more about the star’s personal life outside of Tik Tok and Instagram. This show provides the much needed information about the reality of an internet star’s life because it gives a different perspective of their lifestyle.