Season 3 of Netflix’s “You” Leaves Fans in Shock 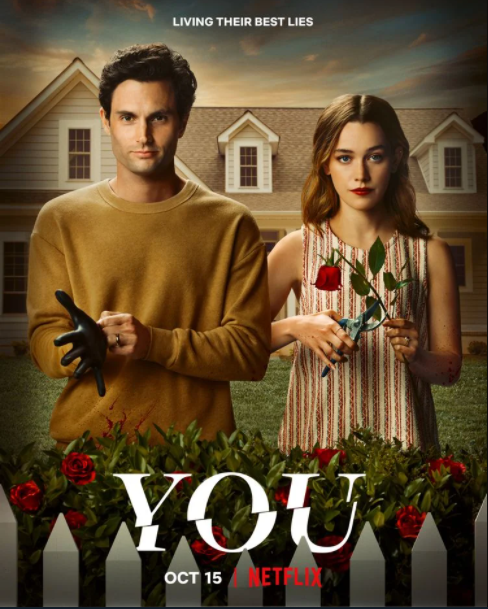 *Spoiler alert for Season 3 of “You”*

This October, the original Netflix series “You” returned for a third season, giving the audience the opportunity to learn more not only from the perspective of the serial killer Joe Goldberg (Penn Badgley), but also learn more about his wife, Love Quinn-Goldberg (Victoria Pedretti), and her perspective of her husband and society around her.

In the second season, viewers learn that Love is also a killer, which causes the two characters to constantly be skeptical of each other throughout the third season. The sociopathic, freshly married couple moves out of Los Angeles and into a suburban community in Madre Linda once Joe learns that Love is pregnant. With a new start, the viewers are hoping that since they will soon be parents, their killing streak will come to an end. However, they learn early on that the idea is far from the truth.

Joe quickly falls back into his old obsessive tendencies when he catches a glimpse at his new neighbor, Natalie (Michaela McManus). Curiosity overcomes him and he begins to follow her around town and breaks into her house. When Love becomes suspicious, Natalie becomes Love’s first murder victim of the season after Love learns that Joe had a box of some of her things. When Joe learns about the killing of Natalie, he expresses concern that his son will be in danger if his wife continues to act out, and decides that he needs a better life than the one he is trapped in, but promises himself not to fall into old patterns with the next girl he finds.

New neighbors Sherry (Shalita Grant) and Cary Conrad (Travis Van Winkle) invite the couple into their inner circle, to make them feel more welcome in the new neighborhood. Sherry, a mom of twins and a social media influencer supporting other moms becomes close friends with Love, which ends up saving her life later in the season. The couple tries to bring Joe and Love into their life as more than friends, but Joe and Love quickly turn on them and they take the couple, that they knocked unconscious, to the infamous glass cage, which makes an appearance each season.

Throughout the season, Joe shows an inner conflict on whether he wants to stay in his marriage, or start a relationship with the woman he works with at the library. Joe feels the need to stay in his marriage with Love for their son, but in the final episode he decides he wants a divorce. After Joe told Love he wants a divorce, she disagrees and then a few minutes later he realizes that Love had put drugs in his drink to make his entire body temporarily paralyzed, so he could not leave. Because they both think the same way, Joe suspected that she would try to make him stay, so he also took a drug so the pill Love gave him would wear off quickly. He then injected Love with a drug that quickly moves through her system and slows her heart, killing her.

After Joe has killed his wife in their own home, he takes his baby, Henry, to one of the couples who live in their neighborhood. Joe returns to his house, goes through their things, looks at pictures and lights the house on fire, burning all evidence that he was responsible for Love’s death.

With Joe now being on his own, with no wife or son to take care of, he gets the fresh start he was longing for. Instead of killing them, Joe and Love left Sherry and Cary in the cage, and they eventually found the hidden key and went on to use their experience from being locked up as a method with marriage therapy. Joe moves to France to begin a new life, finding the next woman who will fall to be a victim of his obsession. This drama-packed season, with more insight into Joe and Love’s thought process that lead to their actions throughout the episodes, leaves the audience wondering what else could this stalker and serial killer pull off without getting caught.