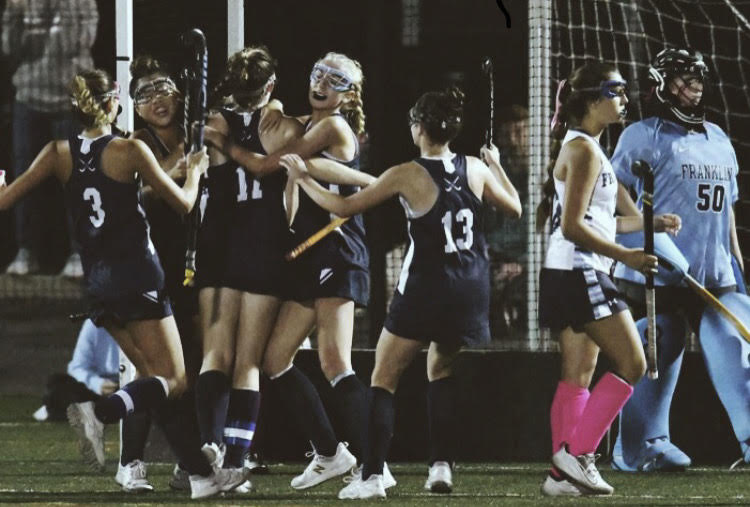 Walpole High School’s field hockey team has been named first place out of all New England teams. Walpole’s 8-0 record maintains their lead over Philip’s Academy and Masconomet Regional High School, who are in second and third place.

The powerhouse team has a total of 12 state titles, dominating the Bay State Conference. After a 4-0 win over Cohasset High School, and a 4-1 win against Central Catholic High School, Walpole remains undefeated this season. The Porkers last recorded loss in the regular season was three years ago. Their only recent loss took place in a non-league match against Moses Brown.

“Our team has an all-around strong foundation,” captain Caroline Whelan said. “We are athletic both offensively and defensively. We can explode on our offense and create fast breaks but are also able to hustle back and stop the ball on defense. I think we all work really well together and are able to read the next play before it even happens. We can almost read each other’s minds.”

Whelan plays a key role in the Porker’s extensive winning streak, acting as one of the senior captains, as well the team’s top scorer. She attributes Walpole’s success largely to their coach, Jen Quinn, who she describes as being influential and a crucial figure in enabling the team to play to their highest potential.

In her 14th year of coaching, head coach Quinn has led the Porkers to state playoffs for the majority of the seasons throughout her reign. Serving as North Attleboro’s coach until 2007, Quinn has years of experience in team leading. She runs intense practices but keeps the team in high spirits with fun activities and laughter.

“Our underclassmen have really blown us away this season too,” Captain Jess Tosone said. “Kerin Birch, Katie Colleran, and Caitlyn Naughton have had a huge positive impact on the team with their attributes, like their speed, stick skills, as well as their defensive stops.

The under and upperclassmen have bonded well this season, and we are looking forward to taking on our tougher teams in the near future.”

The Porkers have been practicing since late summer, preparing themselves for their intense schedule of two or three games a week. They are striving to improve from last season, in which they went undefeated all season and lost in the semi-finals of playoffs.

“Our goal is to stay undefeated,” Tosone said. “We are proud of our leading title but we need to continue practicing to the best of our ability to beat the rest of our opponents and make it to the playoffs.”